Home / World / Putin: Russia could redeploy forces in Syria within hours if needed

Putin: Russia could redeploy forces in Syria within hours if needed

Shares
Russia could redeploy its forces in Syria “in a few hours”, the Russian President Vladimir Putin said today, three days after announcement on Russia withdrawing its military forces Syria 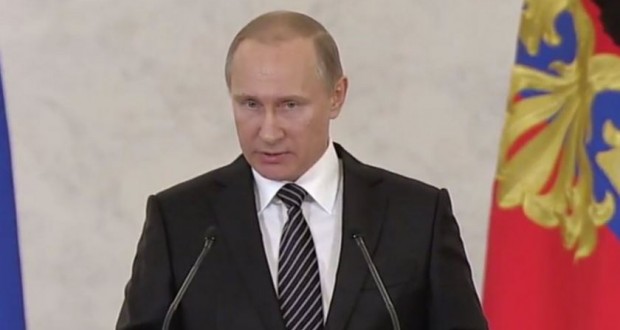 Comments come days after announcing that Moscow’s military involvement in Syria would be wound down, the Guardian reports.

“Of course, if required Russia will be ready in just a few hours to increase its forces in the region to a size that is adequate to meet the situation and use our full arsenal of options,” the Russian president said at a ceremony in the Kremlin to honour pilots who served in the five-and-a-half month mission.

“We don’t want to do that, military escalation is not our preferred route, and so we are hoping that all sides will show common sense and that both the authorities and the opposition will adhere to the peace process.”

Putin said on Monday that, despite the announced pullout, Moscow would keep active the airbase near the Syrian city of Latakia, from which it has run its bombing raids. He added on Thursday that the advanced S-400 missile defence system would be kept in Syria.

During Thursday’s Kremlin ceremony, Putin said the Russian military had spent around 33bn rubles ($470 mln) on the mission in Syria, describing the outlay as “fully justified and necessary”. He also announced that four servicemen had died during the operation.