Shares
NASA’s Dawn spacecraft has revealed marvelous sights on dwarf planet Ceres during its first year in orbit, including the mysterious bright spots in Occator Crater 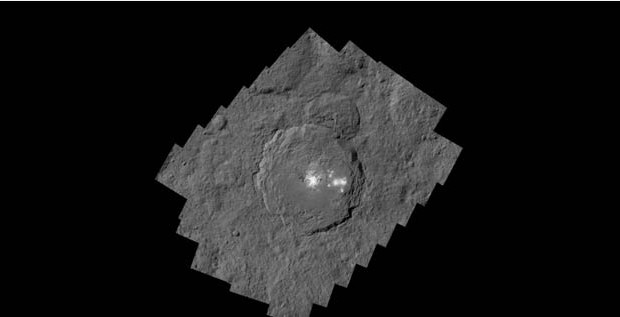 On March 22 NASA showed off the crater pictures at the Lunar and Planetary Science Conference in The Woodlands, Texas, Joinfo.ua reports with reference to the Verge.

Ceres is a dwarf planet in the asteroid belt that lies between the orbits of Mars and Jupiter. Its diameter is approximately 945 kilometers (587 miles). Ceres was the first asteroid discovered, by Giuseppe Piazzi at Palermo on 1 January 1801. It was originally considered a planet, but was reclassified as an asteroid in the 1850s when many other objects in similar orbits were discovered.

Ceres appears to be differentiated into a rocky core and icy mantle, and may have a remnant internal ocean of liquid water under the layer of ice.

The large, bright spot on Ceres can be seen in the most detailed images yet taken from NASA’s Dawn spacecraft, which has been orbiting the dwarf planet for a year. The pictures, taken just 240 miles (385 kilometers) above the surface, show that the region known as Occator Crater is comprised of a complex mixture of land formations, deepening the mystery of how the area formed.

On Tuesday NASA showed off the crater pictures at the Lunar and Planetary Science Conference in The Woodlands, Texas. They reveal that Occator Crater boasts a shiny dome at the center of a relatively smooth pit. Numerous cracks and lines cover the top of the dome, as well as surround the formation on all sides. These strange features suggest that Occator Crater may have seen some kind of recent geologic activity, but researchers won’t know for sure until they get more data from the spacecraft, according to Ralf Jaumann, a  of Ceres last year, Occator Crater looked to be one large bright area,” said Jaumann in a press release. “Now, with the latest close views, we can see complex features that provide new mysteries to investigate.”

Occator Crater is just one of a hundred mysterious bright spots on Ceres that have baffled researchers. Experts think that a salty substance called hexahydrite is what makes these places so shiny, according to a recent study in Nature. It’s possible that asteroids impacting Ceres exposed a layer of salty water-ice underneath the surface. The Sun then turned the exposed water-ice into gas, leaving only the hexahydrite behind.

Along with the pictures of Occator Crater, NASA researchers released other detailed images at the conference today. An enhanced color map of Ceres highlights that a diverse variety of materials are spread across the dwarf planet’s surface. And data from two of Dawn’s instruments were used to create a global portrait of Ceres’ chemical makeup. That data indicates that there may actually be ancient water-ice lurking just underneath the surface at Ceres’ poles, suggesting that scientists may be right about the origins of Ceres’ bright spots.