Shares
An EgyptAir jet on a domestic flight from Alexandria to Cairo was hijacked, forced to divert to Cyprus and landed in Larnaka airport. Most of the passengers were released from plane, except four foreigners and the crew. Later the hijacker surrendered to the authorities 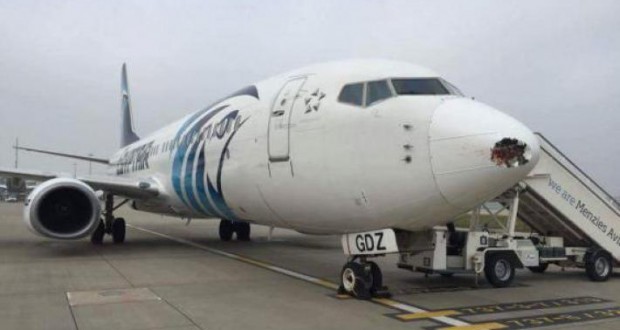 An EgyptAir domestic flight from Alexandria to Cairo was hijacked and forced to divert to Cyprus, in an incident that was “not related to terrorism”, the president of Cyprus said, Joinfo.ua reports with reference to Al Jazeera.

The pilot of the plane was threatened by a passenger strapped with explosives, Egypt’s Civil Aviation Ministry said.

Cyprus President Nicos Anastasiades said the hijacker seemed to have a personal motive and that the incident was “not related to terrorism”.

EgyptAir said that 81 people were on board, including a crew of seven, and that all passengers aside from four foreigners have been released.

The plane was an Airbus 320, Egypt’s aviation ministry said. An official with flight-tracking website FlightRadar24 said the plane showed no immediate signs of distress. The flight between Alexandria and Cairo normally takes about 30 minutes.

The ministry said in a statement that pilot Omar al-Gammal had informed authorities that he was threatened by a passenger who possessed a suicide belt and forced him to land in Larnaca.

A Cyprus Foreign Ministry official said he could not confirm the man was rigged with explosives.

Cyprus state TV said that the hijacker wanted to contact his ex-wife, who lives in Larnaca.

Witnesses told Cyprus Mail newspaper that the he threw a letter on the apron of the airport in Larnaca, written in Arabic, asking that it be delivered to his ex-wife, who is Greek-Cypriot.

She was reportedly on her way to the airport to participate in the negotiations.

Other media outlets in Cyprus reported he first asked to be taken to Istanbul but that the pilot refused this demand.

CYBC said the airplane was parked at an apron at Larnaca airport. The hijacker asked police to back away from the aircraft, it said.

As Reuters reported later, soon after his comments, Cypriot television footage showed several people leaving the plane via the stairs and another man climbing out of the cockpit window and running off.

The hijacker then surrendered to authorities.

“Its over,” the Cypriot foreign ministry said in a tweet.

Speaking to reporters after the crisis ended, Egyptian Prime Minister Sherif Ismail said the hijacker was an Egyptian national but that his motives remained unclear.

“At some moments he asked to meet with a representative of the European Union and at other points he asked to go to another airport but there was nothing specific,” he said, adding that the man would now be questioned to ascertain his motives.