Shares
An official North Korean website has released a new propaganda video portraying a multiple rocket attack on South Korea’s presidential Blue House and other government buildings in Seoul. The video ends with the warning: ‘everything will turn into ashes’ 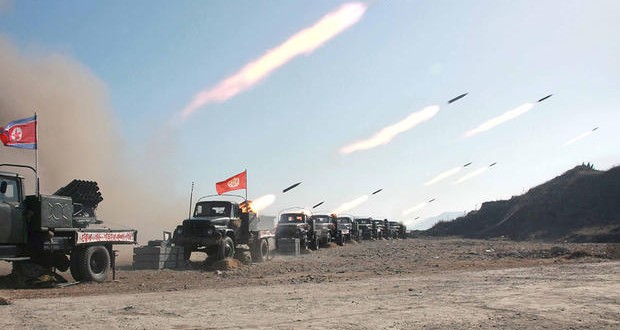 It was uploaded on Monday to the DPRK Today website, which had released another video 10 days earlier depicting a nuclear attack on Washington

The new video – entitled “If the ultimatum goes unanswered” – shows rockets fired from mobile launchers in the North destroying the buildings in a ball of fire.

It ends with the warning: “Everything will turn into ashes”.

Tensions have been rising on the Korean peninsula ever since the North conducted its fourth nuclear test on 6 January.

Over the past month, Pyongyang has issued repeated threats of strikes against Seoul and Washington, largely in response to annual South Korea-US war games that kicked off in early March.

The ongoing joint exercises have been larger than usual and included a special operation to “decapitate” the North Korean leadership in the event of a full-scale conflict.

Pyongyang took that as a direct threat to leader Kim Jong-un, and the Korean People’s Army (KPA) recently issued an “ultimatum” demanding South Korean president Park Geun-Hye apologise and punish those who formulated the strategy.