Shares
Russia may return to the Group of Eight (G8) but only on particular conditions, Foreign Minister of Germany Frank-Walter Steinmeier 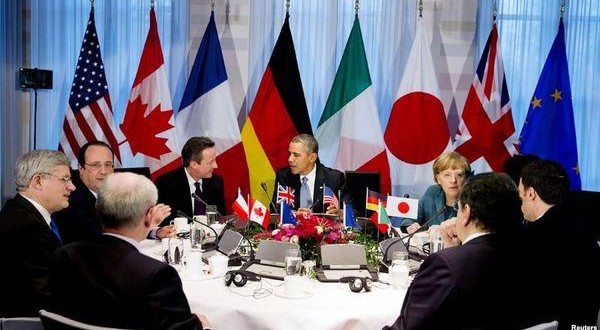 Russia may return to the Group of Eight (G8) but only on particular conditions, Foreign Minister of Germany Frank-Walter Steinmeier told the German press agency DPA on Sunday on the verge of G7 foreign ministers meeting starting today in Hiroshima, UNIAN reports with reference to the Russian news agency TASS.

“I would not like the G7 format to be a long-term one; we need to create conditions for return to the G8 format,” Steinmeier said, according to TASS.

Speaking about conditions for Russia’s return to G8, Steinmeier stressed the need for Russia’s contribution to reaching a “political solution” of the crisis in Ukraine and the “constructive role in establishing peace in Syria.”

In June 2015, Steinmeier stated that the West could not ignore Russia’s violation of international law, but had no interest that the G7 format remained a G7 format permanently, adding that the resolution of a number of military conflicts in neighboring regions of Europe required Russia’s participation.

Russia walked out of the G8 group of the world’s largest economies after a rift with Canada, France, Germany, Italy, Japan, the United Kingdom and the United States over its alleged role in the conflict in Ukraine.