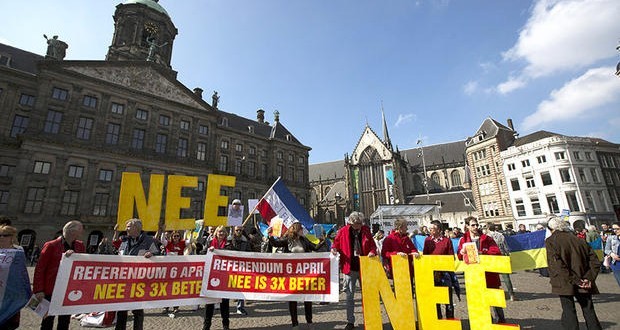 Two coalition parties and two independent MPs of the Dutch parliament voted against revoking the law on ratification of the Ukraine-EU Association Agreement – the government initiative put forward to a vote in Parliament by the Socialist Party of the Netherlands, UNIAN reports citing NOS.nl.

It is noted that the socialists initiated a vote not under the usual party principle, but by name. Each MP was called to say “yes” or “no” personally, according to the report.

Two coalition parties and two independent deputies voted against the initiative, thus supporting the government by 75 votes to 71. One MP from the ruling Labor Party defected to the opposition.

The deputy from the Socialist Party, Harry van Bommel, who is one of the main opponents of the Association, said that he was “disappointed with the outcome of the voting.”

“The opinion of the people faded into the background,” he wrote on Twitter.

On April 6, the Netherlands held a consultative referendum on the Ukraine-EU Association Agreement. 61% of the votes were cast against the agreement with 38.21% of the voters supporting it.

The EU envoy to Ukraine Jan Tombinski earlier said that the results of the EU-Ukraine Association Agreement referendum in the Netherlands will not affect the cooperation between Kyiv and Brussels.