One man killed, three injured in knife attack in Germany

Shares
A knife attack has left one person dead and three injured near Munich. The attacker suffers from mental health and drug problems, according to the police. 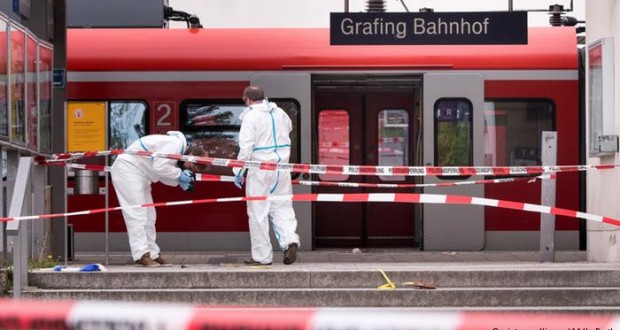 The state interior minister of Bavaria, Joachim Herrmann, has said a suspect being held by police after a knife attack at a train station outside of Munich suffers from mental health and drug problems, Deutsche Welle repors.

Herrmann added that there was no indication of an Islamist background, but police are looking into “political statements” made by the suspect as he carried out the attacks. The suspect has admitted to the stabbings, Herrmann said.

In a statement to reporters, a press spokesperson from the Bavarian state police described how the attack on Tuesday unfolded.

According to Karl-Heinz Segerer, the 27-year-old German suspect stabbed the first victim in a waiting train at the Grafing S-Bahn train station at around 4:50 a.m. The suspect, who was barefoot, then exited the train and stabbed a second person on the train platform. The attacker left the station and stabbed two further men who were cycling by outside.

Police arrived soon after and were able to overpower the man and take him into custody. Bloody prints from bare feet on the train platform could be seen in TV images of the scene as police carried out their investigation later.

Segerer said the knife used was a 10-cm (3.9-inch) blade and added that the man was not registered as a resident of Bavaria. Grafing is a town in the suburbs east of Munich.

State police are leading the investigation due to the possible political motivation behind the attack. Witnesses reported hearing the man yell “Allahu Akbar” (Allah is the greatest) before carrying out the attack. However, as Herrmann told reporters, the findings of the investigation so far do not point to an Islamist background for the suspect.