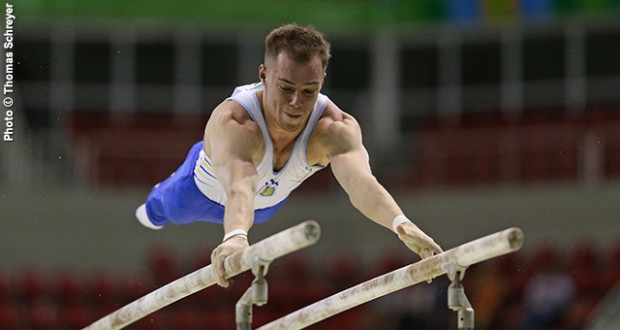 The Ukrainian gymnasts Igor Radivilov and Oleg Vernyayev combined for five of the six titles at the Varna World Challenge Cup in Bulgaria. Radivilov added the vault title to go with his still rings from Saturday, while Vernyayev won parallel bars after winning floor exercise and pommel horse, Joinfo.ua reports with reference to the International Gymnast.

The FIG event attracted more than 100 gymnasts from 24 nations to the seaside city, with many using the competition as a warmup to the upcoming European championships in Bern. The competition is the ninth World Cup event of 2016.

Radivilov, the bronze medalist on vault at the 2012 Olympics, won the vault title Sunday after standing up his Dragulescu and Tsukahara double pike vaults (one step on each). France’s Zachari Hrimèche won the silver with clean landings on the same vaults. Israel’s Andrey Medvedev took third with a Blanik (piked handspring double front) and Tsukahara double pike.

The FIG World Challenge Cup series continues next weekend, May 20-22, in São Paulo.