Home / World / At a Rotary Club Kyiv meeting, UkraineIs presents a new project to help Ukraine and its people

At a Rotary Club Kyiv meeting, UkraineIs presents a new project to help Ukraine and its people 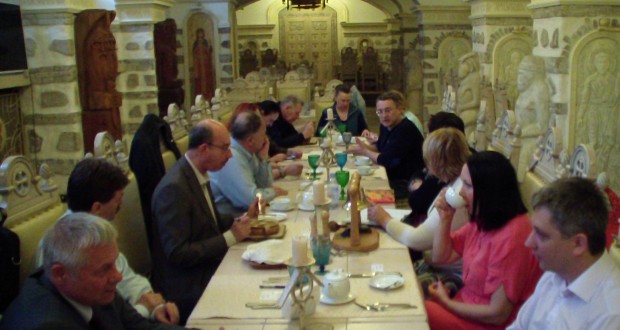 President of the Club Oleksandra Matveyeva introduced the guests to the Club members. Sergiy Vakarin told about the new project of UkraineIs with a strong media support, which aims to help citizens of Ukraine, especially its young people, succeed, and contribute to improvement of Ukraine’s image in the world. UkraineIs already published many articles about the “success stories” of Ukraine. UkraineIs builds positive image of Ukraine domestically and abroad. Vitaliy Nebylitsa mentioned that Ukraine has many talented young people ready to work for a better future, but needs guidance and advice. NASA contest in Ukraine is a good example. UkraineIs supported creation of a scientific hub at the National Aviation University , after the NAU student Andrew Muzichenko and other team Mars Hopper members won the NASA’s contest, taking the first place in the world. NAU HUB already conducted TEDxNAU conference on May 21, 2016. The conference discussed the ideas and possibilities for modern Ukrainian youth in various fields. Ukraine should become a country where science and education will be the main criteria for success. NAU graduates and other Ukrainian institutions, young scientists and inventors should become a serious competition to graduates of Western universities known for positions at prestigious companies. Ukraine should be known in the world as a future-ready country.

Tomorrow’s new technologies are the key to Ukraine’s success.

Director of Vepol Leonid Cherepov, a special guest of the Rotary Club Kyiv confirmed the need to improve protection of intellectual property in Ukraine. Ukrainian patents and inventions should match foreign analogues. Vepol has worked for many years to help inventors protect their rights in Ukraine and worldwide.

The Club members appreciated the presentation and proposed various possibilities for co-operation. A new Rotary District 2232 will start in June 2016 to integrate Rotarians from Ukraine and Belarus.