Shares
Three crew members representing the United States, Russia and Japan are on their way to the International Space Station after launching from the Baikonur Cosmodrome in Kazakhstan at 9:36 p.m. EDT Wednesday, July 6 (7:36 a.m. Baikonur time, July 7). 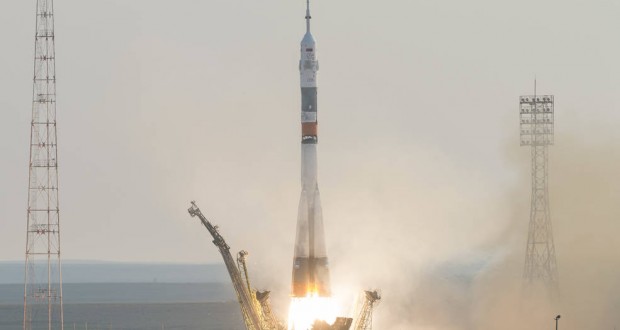 Rubins, who holds a bachelor’s degree in molecular biology and a doctorate in cancer biology, Ivanishin and Onishi are scheduled to remain aboard the station until late October. Williams, Skripochka and Ovchinin will return to Earth in September.

Expedition 48 crew members are expected to receive and install the station’s first international docking adapter, which will accommodate future arrivals of U.S. commercial crew spacecraft. Scheduled for delivery on SpaceX’s ninth commercial resupply mission (CRS-9) to the station, the new docking port features built-in systems for automated docking and uniform measurements. That means any spacecraft may use the adapters in the future – from NASA’s new crewed and uncrewed spacecraft, developed in partnership with private industry, to international spacecraft yet to be designed. The work by private companies to take on low-Earth orbit missions is expected to free up NASA’s resources for future crewed missions into deep space, including the agency’s Journey to Mars, with the Orion crew capsule launching on the Space Launch System rocket.

It should be recalled that on July 4, NASA’s Juno spacecraft successfully entered Jupiter’s orbit. Over the next few months, Juno’s mission and science teams will perform final testing on the spacecraft’s subsystems, final calibration of science instruments and some science collection.