Home / World / Organizations helping IDPs are about to become displaced themselves: sponsor urgently needed for the House of Free People

Organizations helping IDPs are about to become displaced themselves: sponsor urgently needed for the House of Free People

Shares
UkraineIs NGO sponsored a tour to the Experimentanium Science Center for a group of kids from Donbas. The kids have witnessed the military actions in their previous neighborhoods, and parents of some kids in the group were prisoners of war. 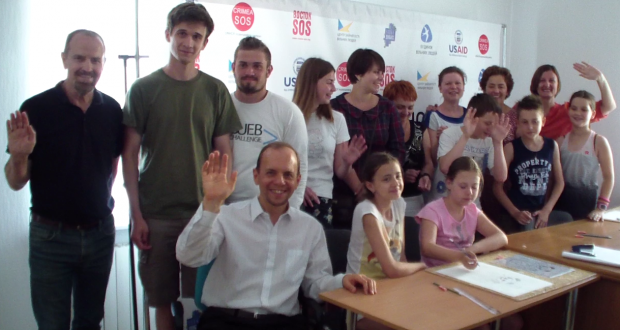 UkraineIs NGO Chairman Sergiy Vakarin visited the House of Free People, a home to NGOs that help displaced families from Donbas, including New Donbas, Vostok-SOS, Krym-SOS and an Employment Centre of Free People. As a result, UkraineIs and the House of Free People started cooperation. UkraineIs sponsored a tour to the Experimentanium Science Center for a group of kids from Donbas. The group was organized by Svitlana Tarabanova, volunteer at Vostok SOS. The kids have witnessed the military actions in their previous neighborhoods, and parents of some kids in the group were prisoners of war. UkraineIs also sponsored nomination at the famous Views of the World Festival in Montreal of a film called Bohdan’s Happiness produced by Lora Artyugina and her New Donbas NGO. Not only does this film underscore the Festival’s mission to help children but also it uniquely combines showing the ugliness of war damages, beauty of childhood and self-sacrificing work of volunteers who help the kids survive, study in schools and lead happy life no matter what. The message of this film will hopefully help avoid further military action in Ukraine and save many more innocent women, children and elderly people. New Donbas helped restore several schools destroyed by war in the area. It was not only material and technical basis that was restored. They offered rehabilitation therapy; painting studios started working; there were master-classes; psychologists came. So we became friends and cooperated for a year», said Olha Krasnopeeva, Director of School #3 in Mykolayivka near Slovyansk Natalia Tymoshenko, volunteer of New Donbas told Sergiy Vakarin that the organization also tries to help IDPs in many other ways. In particular, after a successful start of a School of Cinematography project in Kyiv, this summer New Donbas is organizing a camp in Odesa where kids from Donbas will learn the art of film making.

On Friday, Vitautas Landsbergis, the legendary Lithuanian leader who started the breakdown of the Soviet Union, visited the House of Free People.

Two years have passed since the first internally displaced people (IDPs) appeared in Ukraine. Following Russia’s annexation of Crimea in March 2014, some residents of the peninsula fled to mainland Ukraine. People like Aleksandra Dvoretskaya, now Vostok-SOS coordinator, fled after sensing a real threat from the new authorities. A much greater influx of refugees began later that summer, when the military conflict began in the Donetsk and Luhansk regions of eastern Ukraine. Thousands of people had already left Crimea, but now hundreds of thousands of people needed help. Government figures from spring 2016 refer to nearly 1.8 million refugees.

In the House of Free People hub one is able to get legal consultations, humanitarian aid, find out about job opportunities, and find answers for questions that matter. There are consultants on the first floor, and the Employment Centre on the second. Both Vostok-SOS and Krym-SOS were founded by human rights Euromaidan activists from Luhansk and Simferopol that had to escape their own homes. They’ve started from scratch and have evolved into strong institutions providing shelter, legal assistance, lobbying laws that concern internally displaced persons, co-ordinating volunteers in areas near the frontline.

Volunteers also showed Sergiy Vakarin the basement of the House of Free People where displaced families can get some temporary clothes and footwear. Sadly, New Donbas, Vostok-SOS and other volunteer organizations who help IDPs are about to become displaced themselves as no sponsor is available for their premise after September when the current USAID grant finishes. UkraineIs and Joinfo are asking potential sponsors to help. Volunteers are also welcome to join the House of Free People and/or help restore destroyed schools of Donbas. Education and social projects are part of the mission of UkraineIs.

UkraineIs also promoted MarsHopper, a Ukrainian project and Kid on the Moon, a Toronto project chaired by a Canadian Ukrainian to global first places in two nominations of NASA’s competition. They will come to NASA’s Cape Canaveral Goddard Space Flight Center (GSFC) to watch a space launch. UkraineIs also closely cooperates with Canada.

This year the previously US-based Views of the World Film and Music Festival will be conducted in Montreal. Director of the Festival is the former Emmy producer George Leclere who visited Ukraine earlier this year to present an innovative digital&TV technology.