Shares
NASA astronaut Kate Rubins, cosmonaut Anatoly Ivanishin of Roscosmos, and astronaut Takuya Onishi of the Japan Aerospace Exploration Agency (JAXA) joined their Expedition 48 crew members aboard the ISS officially at 2:26 a.m. EDT July 9 when the hatches opened between their Soyuz MS-01 and the space station. 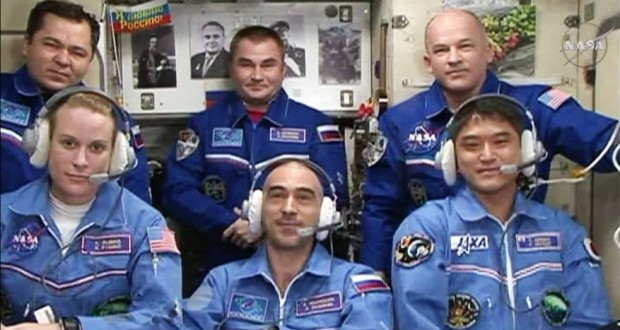 Expedition 48 Commander Jeff Williams of NASA and Flight Engineers Oleg Skripochka and Alexey Ovchinin of Roscosmos welcomed the trio aboard their orbital home, according to the NASA report.

In the coming months, the crewmates are scheduled to receive multiple cargo resupply flights delivering several tons of food, fuel, supplies and research.

SpaceX’s ninth commercial resupply services mission under contract with NASA is scheduled to launch to the space station no earlier than July 18 at 12:45 a.m. Research aboard the Dragon cargo spacecraft will include experiments to test the capabilities for sequencing DNA, understand bone loss, track heart changes in microgravity and regulate temperature aboard spacecraft. The first of two international docking adapters is also headed to station in Dragon’s unpressurized trunk, which will allow commercial spacecraft to dock to the station when transporting astronauts in the near future as part of NASA’s Commercial Crew Program. Williams and Rubins are scheduled to install the adapter during a spacewalk later this summer.

Rubins, Ivanishin and Onishi are scheduled to remain aboard the station until late October. Williams, Skripochka and Ovchinin will return to Earth in September.