Shares
On July 11, Ukraine and Canada have signed a Free Trade Agreement. Prime Minister of Canada Justin Trudeau said the accord will create new opportunities, jobs, markets and facilitate the improvement of the living standards. 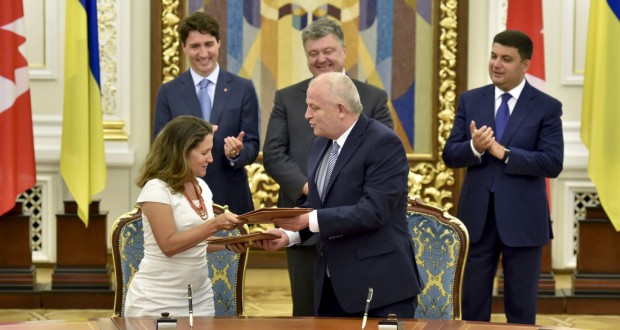 In the presence of President Petro Poroshenko and Prime Minister of Canada Justin Trudeau, the Free Trade Area Agreement between Ukraine and Canada was signed in Kyiv by First Vice Prime Minister – Minister of Economic Development and Trade of Ukraine Stepan Kubiv and Minister of International Trade of Canada Chrystia Freeland, Joinfo.ua reports with reference to the presidential press service.

“The given Agreement will become an instrument to simplify and enhance economic interaction between our countries,” the Head of State noted.

According to President Poroshenko, the document envisages not only the removal of tariff barriers, but also clear commitment to remove 99% of barriers in the international trade in 7-year term.

“This is a preferential access for goods of Ukrainian and Canadian origin respectively. These are new opportunities for the expansion of markets for goods and transparent trading conditions,” Petro Poroshenko emphasized adding that the Agreement would provide access for Ukrainian producers to the public procurement system of Canada and vice versa.

Besides, the Agreement will become another anti-corruption instrument of Ukraine.

In his turn, Justin Trudeau noted that the Agreement would create more predictable trading conditions between the two countries.

“By eliminating tariffs and barriers for almost all kinds of goods the Agreement will be beneficial for both countries and create new opportunities, jobs, markets and facilitate the improvement of the living standards. It will give a boost to the development of our economies,” the Prime Minister of Canada said.

Ukrainian President emphasized that the Ukrainian and Canadian parties were not going to stop on the FTA Agreement and would continue working over the expansion of that document’s scope.

Petro Poroshenko believes Canada and Ukraine have a huge potential for cooperation. In this context, Ukraine has invited Canadian investors.

It should be recalled that Prime Minister of Canada Justin Trudeau is visiting Ukraine on July 11-12.