Shares
Portugal won the football championship on Sunday for the first time ever by beating host country France 1-0, in overtime with a goal by Éder, at 109 minutes, in ‘Stade de France’. 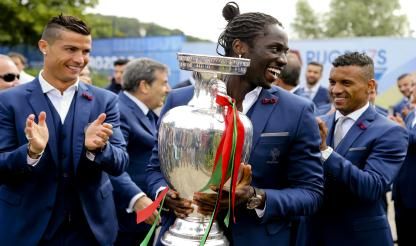 A wonderful strike by former Swansea City striker Éder, ten minutes from the end of extra-time, made history as Portugal lifted their first major championship trophy, The Portugal News reports.

The Portuguese team became the second one in history to beat the home team in the final, 12 years after being on the wrong side of the match in Lisbon when they lost 1-0 to Greece in the Euro2004.

After the game the President of Portugal, Marcelo Rebelo de Sousa, announced that manager Fernando Santos and the team would be honoured by the award of Commander of the Order of Merit (Comendador Ordem do Mérito).

Lisbon town hall said on Monday it was giving its workers the afternoon off following Portugal’s victory in the Euro2016 football championship.