Shares
Nearly 20,000 members of the police, civil service, judiciary and army have been detained or suspended since an attempted coup on 15 July 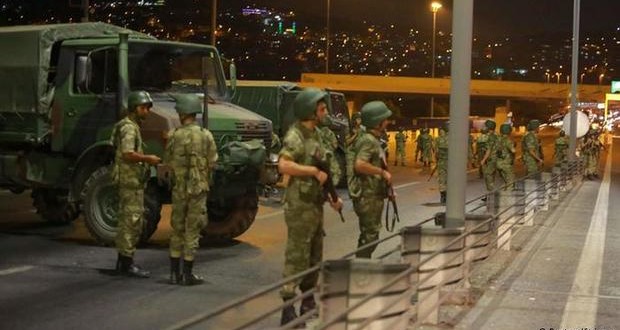 Turkey purged its police on Monday after rounding up thousands of soldiers in the wake of a failed military coup, and said it could reconsider its friendship with the United States unless Washington hands over a cleric Ankara blames for the putsch, Reuters reports.

Nearly 20,000 members of the police, civil service, judiciary and army have been detained or suspended since Friday night’s coup, in which more than 200 people were killed when a faction of the armed forces tried to seize power.

The broad crackdown and calls to reinstate the death penalty for plotters drew concern from Western allies who said Ankara must uphold the rule of law in the country, a NATO member whose cooperation in the fight against Islamic State is crucial to Washington.

Some voiced concern President Tayyip Erdogan – who said he was almost killed or captured by the mutineers – was using the opportunity to consolidate his power and further a process of stifling dissent which has already caused tensions with Europe.

Turkey’s foreign ministry said criticism of the government’s response amounted to backing for the bid to overthrow it.

A senior security official told Reuters that 8,000 police officers, including in the capital Ankara and the biggest city Istanbul, had been removed from their posts on suspicion of links to Friday’s abortive coup.

Prime Minister Binali Yildirim said 7,543 people had so far been detained, including 6,038 soldiers. Some were shown in photographs stripped to their underpants and handcuffed on the floors of police buses and a sports hall. A court remanded 26 generals and admirals in custody on Monday, Turkish media said.

Officials in Ankara say former air force chief Akin Ozturk was a co-leader of the coup. The state-run Anadolu agency said on Monday he had confessed, but private broadcaster Haberturk contradicted this, saying he had told prosecutors he tried to prevent the attempted putsch.

The Turkish government says it was masterminded by Fethullah Gulen, a Muslim cleric based in the United States who has a wide following in Turkey. He denies any involvement.

Ankara has demanded Washington hand Gulen over, and Erdogan told international broadcaster CNN on Monday that an extradition request would be filed this week. Washington says it is prepared to extradite him but only if Turkey provides evidence linking him to crime. Yildirim rejected that demand.

“We would be disappointed if our (American) friends told us to present proof even though members of the assassin organization are trying to destroy an elected government under the directions of that person,” Yildirim said.

“At this stage there could even be a questioning of our friendship.”.

Yildirim said 232 people were killed in Friday night’s violence, 208 of them civilians, police and loyalist soldiers, and a further 24 coup plotters. Officials previously said the overall death toll was more than 290.

Around 1,400 others were wounded as soldiers commandeered tanks, attack helicopters and warplanes in their bid to seize power, strafing parliament and the intelligence headquarters and trying to seize the main airport and bridges in Istanbul.