Shares
Solar Impulse 2 landed back again in Abu Dhabi last night, just over two days after it took off from Cairo late on July 23rd, completing the final leg of its long journey. 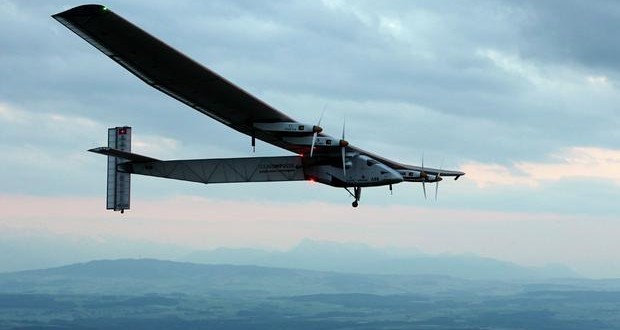 More than a year after it took off from Abu Dhabi, solar-powered plane has completed its round-the-world trip, the Verge reports.

The craft spent a total of 505 hours — more than 23 days — in the air, stopping at airports across Europe, North America, and Asia to avoid inclement weather, and to give its two pilots well-deserved breaks.

It took pilot Bertrand Piccard two days and 37 minutes to fly Solar Impulse 2 from Cairo to Abu Dhabi, but that wasn’t close to the longest leg of the 16-step journey. That honor went to the trip across the Pacific ocean, with Piccard’s fellow pilot André Borschberg manning the controls for 4 days, 21 hours, and 51 minutes as he flew the craft from Nagoya, Japan, to Honolulu, Hawaii. It was the endurance capabilities of the two pilots that dictated the journey’s route and regular stops, rather than Solar Impulse 2 itself, which could theoretically fly forever on the power provided by 17,000 photovoltaic cells housed on its wings.

The solar plane is wider than a Boeing 747, with a wingspan of 72 meters (236 feet), but offers its pilots none of the same comforts as that craft, cooping them up in a cramped cockpit for hours on end. It also doesn’t share the jet engines of airliners, instead traveling through the skies at a leisurely 30 mph, making even the short hops between European countries fairly grueling experiences for its pilots. The journey from Cairo to Abu Dhabi was also made more difficult by severe turbulence, forcing Piccard to keep a grip on the controls as he ascended to 29,000 feet during the day, and back down to 5,000 feet at night, when the plane’s solar cells weren’t being charged.

From the cockpit of the Solar Impulse 2, Piccard called on everyone to see the round-the-world journey as a call to action.

“All the clean technologies we use, they can be used everywhere. So we have flown 40,000km, but now it is up to other people to take it further. It is up to every person in a house to take it further, every head of state, every mayor in a city, every entrepreneur or CEO of a company.”