Shares
An Emirates plane has crash-landed at Dubai International Airport. All 300 people on board were able to escape from the burning aircraft. 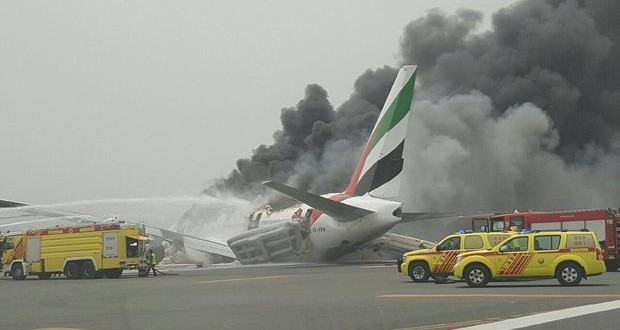 The Boeing 777 was flying to Dubai from the southern Indian state of Kerala, BBC reports.

The plane appeared to have landed on its belly, and images showed thick black smoke rising into the sky. The cause of the incident is not known.

The Dubai government media office said all passengers were evacuated safely and no injuries have been reported.

Flights to and from the airport were suspended for several hours but have now resumed.

A passenger on board the plane told Reuters that the experience was terrifying.

“As we were landing there was smoke coming out in the cabin,” said Sharon Maryam Sharji.

“People were screaming and we had a very hard landing.

“We left by going down the emergency slides and as we were leaving on the runway we could see the whole plane catch fire.”

Emirates airline said there were 282 passengers and 18 crew on board from 20 nationalities, most of them Indian, with 24 Britons and 11 people from the United Arab Emirates.

The aircraft is sitting on the ground without its landing gear, but it is not clear why the wheels are not down.

Some reports suggest the crew were making a normal, rather than an emergency approach, when air traffic controllers told them to abandon the landing and start climbing again, for unknown reasons.

The answers should come out in the next few days.

Whatever the cause, it is a testament to the crew that they got everyone off the plane safely.