Shares
Known for its fast and bright meteors, the annual Perseid meteor shower is anticipated to be one of the best potential meteor viewing opportunities this year. 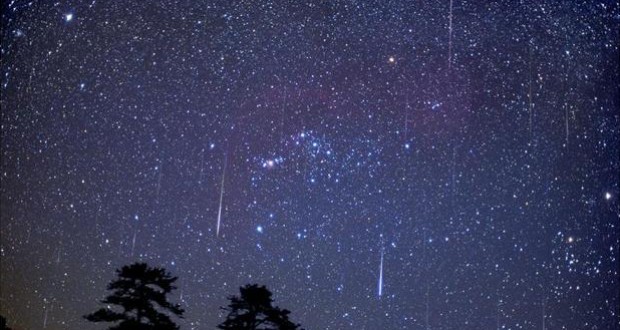 The Perseids show up every year in August when Earth ventures through trails of debris left behind by an ancient comet. This year, Earth may be in for a closer encounter than usual with the comet trails that result in meteor shower, setting the stage for a spectacular display, according to NASA.

“Forecasters are predicting a Perseid outburst this year with double normal rates on the night of Aug. 11-12,” said Bill Cooke with NASA’s Meteoroid Environments Office in Huntsville, Alabama. “Under perfect conditions, rates could soar to 200 meteors per hour.”

The best way to see the Perseids is to go outside between midnight and dawn on the morning of Aug. 12. Allow about 45 minutes for your eyes to adjust to the dark. Lie on your back and look straight up. Increased activity may also be seen on Aug. 12-13.

For stargazers experiencing cloudy or light-polluted skies, a live broadcast of the Perseid meteor shower will be available via Ustream overnight on Aug. 11-12 and Aug. 12-13, beginning at 10 p.m. EDT.

Every Perseid meteor is a tiny piece of the comet Swift-Tuttle, which orbits the sun every 133 years. Each swing through the inner solar system can leave trillions of small particles in its wake. When Earth crosses paths with Swift-Tuttle’s debris, specks of comet-stuff hit Earth’s atmosphere and disintegrate in flashes of light. These meteors are called Perseids because they seem to fly out of the constellation Perseus.

Most years, Earth might graze the edge of Swift-Tuttle’s debris stream, where there’s less activity. Occasionally, though, Jupiter’s gravity tugs the huge network of dust trails closer, and Earth plows through closer to the middle, where there’s more material.

This may be one of those years. Experts at NASA and elsewhere agree that three or more streams are on a collision course with Earth.

“Here’s something to think about. The meteors you’ll see this year are from comet flybys that occurred hundreds if not thousands of years ago,” said Cooke. “And they’ve traveled billions of miles before their kamikaze run into Earth’s atmosphere.”