Shares
A winged dinosaur nicknamed 'Mud Dragon' has been found in China. Its fossilised skeleton was unearthed by a farmer and construction workers 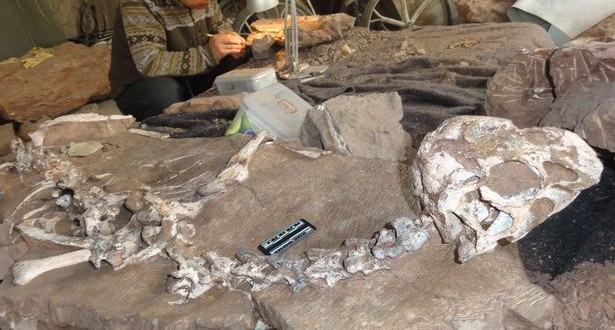 A bizarre winged dinosaur nicknamed the “Mud Dragon” has been captured in its dramatic death throes 70 million years ago thanks to remarkably preserved remains, Joinfo.com reports with reference to Mirror.

The new bird-like creature is almost intact – showing how it was lying on its front with limbs splayed to the side, wings and neck outstretched and head raised as it struggled to escape the mud in what would become southern China.

Dr Steve Brusatte, of the University of Edinburgh, said: “This new dinosaur is one of the most beautiful, but saddest, fossils I have ever seen.

“But we are lucky the ‘Mud Dragon’ got stuck in the muck, because its skeleton is one of the best examples of a dinosaur that was flourishing during those final few million years before the asteroid came down and changed the world in an instant.”

These were feathered dinosaurs known for their short, toothless heads and sharp beaks.

Some, including the “Mud Dragon”, had crests of bone on their heads that were probably used as display structures to attract mates and intimidate rivals, like modern day cassowaries.

Its fossilised skeleton was unearthed by a farmer and construction workers which meant it was not examined in its original location.

This makes it difficult to interpret what may have caused its unusual position when it was killed and buried in Jiangxi Province in the south of the country.

Palaeontologists say Tongtianlong is different to other species of oviraptorosaur owing to its unique dome like skull and a very convex premaxilla, a bone at the tip of the upper jaw.

It lived some time between 66 and 72 million years ago, just before dinosaurs were wiped out by an asteroid that smashed into Earth, and is providing valuable clues about a family of creatures that flourished just before the mass extinction.

Recent fossil discoveries suggest this group of flightless animals was experiencing a population boost and diversifying during the 15 million years before the dinosaurs died out.

The skeleton was discovered during excavations using explosives at a school construction site near Ganzhou.

The fossil remains are remarkably well preserved and almost complete, despite some harm caused by a dynamite blast at the location.

Researchers say the creature, described in Scientific Reports, helps understand how the last surviving dinosaurs were flourishing before tragedy struck.

In the last five years six groups of oviraptorosaurs identified in the region, dating from about 72 million years ago.