Shares
An unidentified object, believed to be an aircraft engine, fell from the sky near Hpakant jade mine in mountainous region of Myanmar 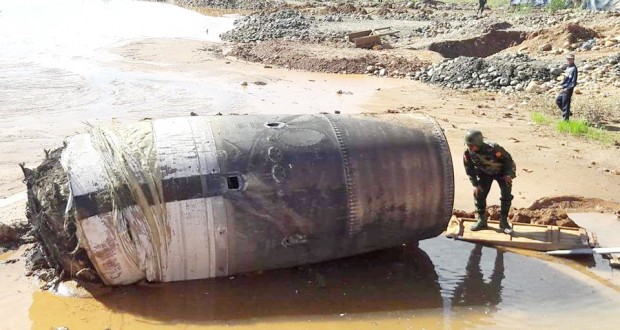 A resident from a nearby Lone Khin village told The Myanmar Times that at 6 am on Thursday (November 10) he heard what sounded like an explosion and felt the ground vibrate.

“Locals thought it was the explosion of heavy artillery,” he said. “I walked over to it and saw it was part of an engine.”

It struck near an abandoned jade mine between Hmaw His Zar village and Nat Ma Pyeit village in Hpakant township. The mysterious cylindrical object is about 12 feet (3.7 metres) long and 5 feet in diameter, said Ko Maung Myo, who took several photos of it. “I think it was an engine because I found a diode and many copper wires at the tail of the body,” he said. “It also looks like a jet engine block.”

The air near the object smelled acrid, as though something was burning, he said.

State officials and witnesses said there were no injuries, though the object fell near two small tents where jade miners sleep.

The Kachin State government was also unable to immediately identify the object.

“Experts are there checking it,” said Kachin State government deputy director U Zaw Myo Nyunt. “They also assumed that it was part of some aircraft or rocket.”

A former executive engineer of the Department of Civil Aviation reviewed pictures of the object on his Facebook page yesterday, noting that it may not be an engine but a rocket booster used for launching satellites into space.