Shares
Jackie Chan was honored with a golden statue at the 2016 Governors Awards on Saturday night. The Academy Board of Governors awarded Chan for his contributions to film. 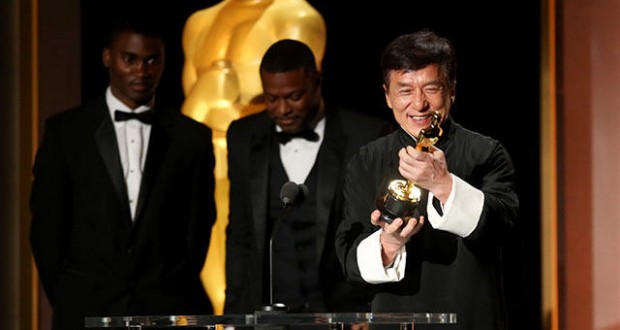 The actor said that he’s wanted to win an Oscar award since Sylvester Stallone let him hold his, Joinfo.com reports with reference to Celebuzz.

The Governors Awards are an annual event where the Academy’s Board of Governors present their testimonial awards.

During his acceptance speech, Chan told a story about his father asking why he doesn’t have an Oscar yet. “I just look at my dad and said, ‘Ha ha ha, Dad, I only make comedy action movies.’”

Chan joked in his speech that when Academy President Cheryl Boone Isaacs called to tell him he won, he asked, “Are you sure?”

Chan ended the speech by thanking his fans around the world. “You’re the reason I continue to make movies, jumping through windows, kicking and punching, breaking my bones. Thank you so much!” The actor received a standing ovation.