Shares
Two adult cows and a calf were safely rescued from an island of land near New Zealand town Kaikoura where they were stranded due to the landslide after the strong earthquake on Monday. 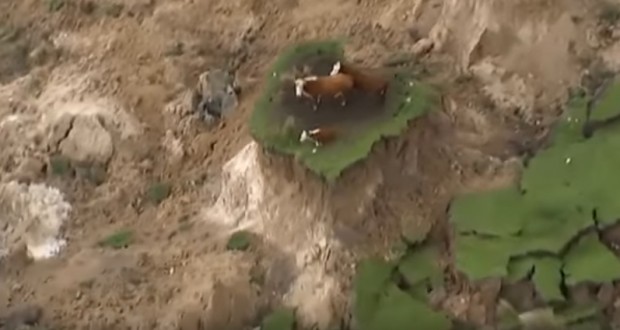 The New Zealand source Newshub reported that three cows that became famous around the world after they stuck on the patch of a land were rescued safely by the owner, a Kaikoura farmer, with pick and shovel.

The cows were stranded on the small island of grass amidst chaos, after midnight Monday 7.8 magnitude earthquake that shook much of the country.

The farmer said those cows were lucky to survive while he lost part of stock after the earthquake. The rescue was delayed due to the threat of aftershocks and further landslide.

“They desperately needed water, cows don’t like living without water so that was the first requirement, and I think one or two had lost calves in the earthquake so they were a bit distressed.”

He said the fault line runs right underneath his farm, and the quake lifted part of his land by three meters.