Shares
Bad weather overnight to Sunday left thousands of homes in the French region of Brittany without power. And in the English Channel, a cargo ship took on water amid a storm lashing the southern English coast. 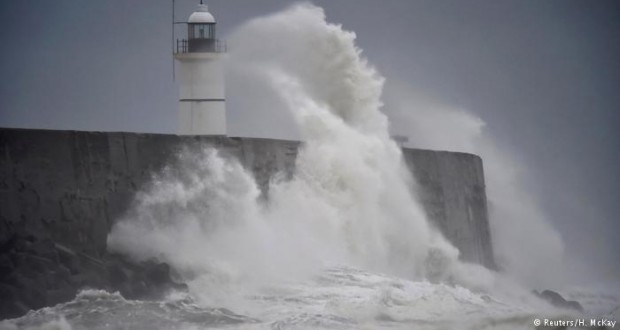 Meteo France said the stormy conditions resulted from a rare combination of bad weather in the northeastern Atlantic and a strong airstream directed at northwestern France. The winds were expected to die down on Monday.

Media reports said that many trees and roofs were torn down in the violent winds.

On the other side of the English Channel, a storm affecting England’s south coast has brought a cargo ship into difficulty, British coast guards said on Sunday.

The Maritime and Coastguard Agency said the 650-foot (200-meter) vessel, carrying 23 people, lost power near the southern port city of Dover, causing it to drift into a rock-laden barge. The agency said a tug was being sent to tow the leaking ship to safety, and that some crew members had already been taken from board.

Two helicopters were involved in the evacuation measures, according to the agency, with duty commander Steve Carson saying the accident had been declared “a major incident.”

Local media reported the name of the ship as the Saga Sky. Watch the video from The Mirror below:

The storm, called Angus, is the first big one of the autumn-winter season in Britain. Forecasters said the southern coast had been hit by 110 kph winds, with one offshore gust reaching 156 kph.