Shares
The new confinement for the 4th reactor of the Chornobyl nuclear power plant in Ukraine, which exploded and caused an unprecedented environmental disaster in 1986, will be completed on November 29. 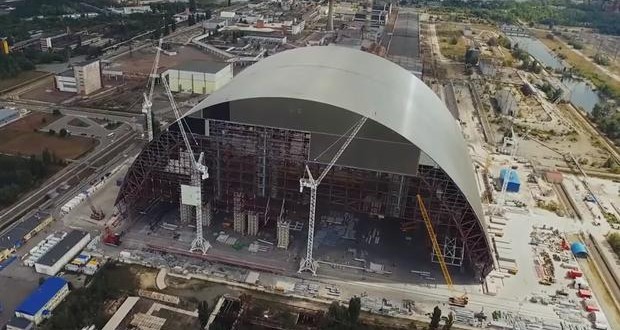 A giant dome, called “The Arch”, will cover the old crumbling concrete sarcophagus constructed over the ruined 4th reactor of the Chornobyl nuclear power plant after the catastrophe on April 26, 1986, Joinfo.com reports.

In a few days, the 36,000-ton steel structure will be put in place. The arch will be 110 m high and 165 m long and will hopefully prevent the radiation leaks into the environment for the next hundred years.

The construction began in 2012 and cost $1.5 bln, which required financial help of donors from more than 40 countries to implement the project.

The final disposal of the fuel rods under the new roof is technically possible, but it is a dangerous and expensive task. Experts suggest that there are about 200 tons of enriched uranium present at the scene.

Webcams at the construction site show the process in a real time.

It should be recalled that two Chinese firms plan to build a solar power plant in the exclusion zone around the Chornobyl nuclear reactor.