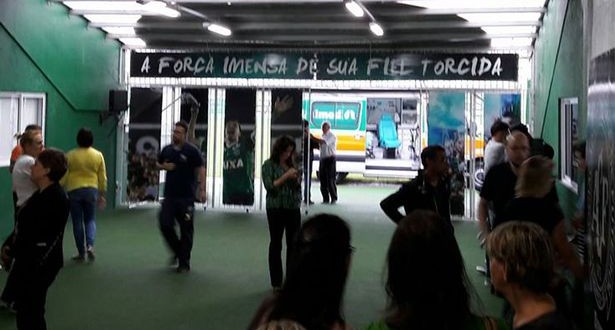 The nine players who were not traveling with the team must now come to terms with the decimation of their club on the eve of what should have been its finest moment, Mirror reports.

On Wednesday night, tiny Chapecoense were due to play the first leg of the Copa Sudamericana final against Atletico Nacional. Virtually an entire squad of players, the coaching staff and a raft of directors have now perished in tragic circumstances and the inescapable, incomprehensible grief was visible on the faces of those players who didn’t travel and the fans who gravitated to the club’s headquarters to try and express their helplessness and distress.

“Pray for my teammates,” tweeted Alejandro Martinuccio, one of Chapecoense’s two overseas players, who was left out of the squad with an injury. The former Villarreal forward kicked a dustbin to the ground as he arrived, glassy-eyed, at the club’s base.

“I can’t believe it,” defender Demerson told local reporters. The 30-year-old was simply left out of the squad.

“It can’t be true,” said Nenem. Distraught players gathered in the changing rooms in silence while fans wept outside.

The charter plane with 81 people on board, including Brazilian football team Chapecoense Real, crashed in a mountainous area near Medellin on Monday night.

According to CNN, rescuers have recently found a sixth survivor under the aircraft’s fuselage of the plane that crashed in Colombia found.

It was earlier reported that the other survivers are Alan Luciano Rushel and Helio Hermito Zampier, defenders, Jackson Ragnar Follman, a goalkeeper. Marcos Padilha aka Danilo, another goalkeeper, survived the crash but died of his injuries later.