Shares
Japanese artist Manabu Ikeda has completed a giant, super-detailed painting that according to art connoisseurs, is the largest and most time-consuming ink & pen creation. 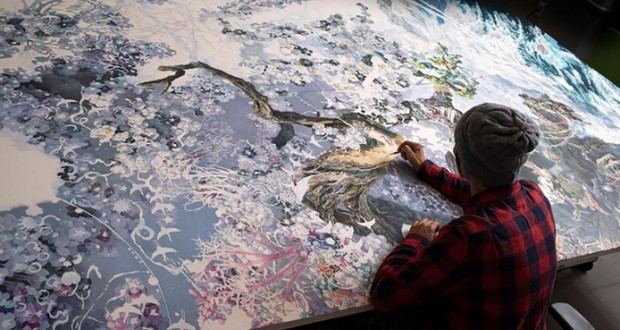 Manabu Ikeda, 43, has worked for 3.5 years, six days a week, 10 hours a day. The 3m wide and 4m long artwork is named “Rebirth”. It depicts the resurrection of the world after disasters as the tsunami that struck Japan in 2011, Joinfo.com reports with reference to Ad.nl.

Ikeda started the work in 2013. “I have been inspired by the earthquakes and tidal waves that regularly ravage my country,” he told Japanese media.

The artist always works with a pen and inks of different colors, because his technique demands to draw the smallest details. On “Rebirth” there are thousands tiny details.

“It would take years to watch and still discover new things,” said Ikeda.

The artist has made similar work earlier, but never as big as this painting.