New Chornobyl confinement will prevent radiation leakage for next 100 years

Shares
The new Safe Confinement Sarcophagus (The Arch) was finally moved into the place, enclosing the destroyed 4th reactor of the Chornobyl nuclear power plant in Ukraine 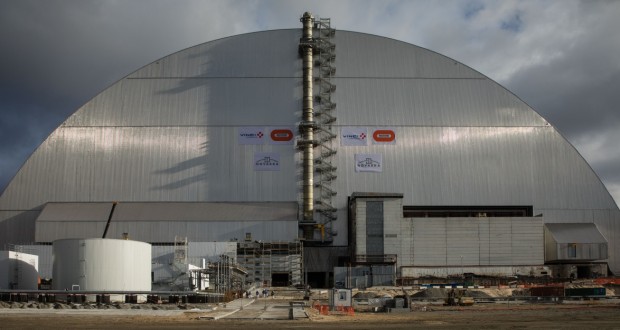 The Arch, the world’s biggest movable facility, is 110 m high and 165 m long, was built by JV Novarka. On November 29, it was finally put in place over the 4th reactor of the Chornobyl nuclear power plant, Joinfo.com reports.

The Arch will encase the crumbling concrete sarcophagus constructed after the catastrophe on April 26, 1986, and prevent the radiation leaks into the environment for the next hundred years.

Ukrainian President Petro Poroshenko took part in the ceremony of completing the installation of the Arch on Tuesday, as the presidential press service reported. President Poroshenko stressed that this unique construction combines the efforts of Ukraine and 28 countries-donors who raised over 1 billion 417 million euros. The project involved 10 thousand workers from various countries. A total of 40 countries took part in the construction. Petro Poroshenko expressed special gratitude to the G7 countries whose ambassadors took part in the event today, and to the European Bank for Reconstruction and Development.