Shares
Thousands of fans have gathered at Brazil's Chapecoense stadium to pay tribute to those killed when the football team's plane crashed. 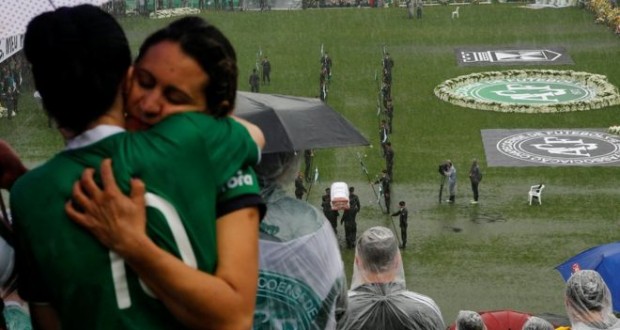 Bodies of the victims arrived at the stadium in a procession through Chapeco after arriving from Colombia, Joinfo.com reports with reference to BBC.

Seventy-one people died in Monday’s crash outside Medellin where the team was due to play. Six survived.

The cause of the crash is unclear. But a recording suggests the plane was out of fuel moments before the crash.

50 first coffins arrived to Chapeco from Colombia on Saturday.

Brazilian President Michel Temer attended the ceremony at the stadium.

The victims include 64 Brazilians, five Bolivians, a Venezuelan and a Paraguayan.

Nineteen of the dead were players with Chapecoense. Many more were support staff and journalists covering the team.

A minute’s silence will be held before every football match this weekend.

The team has been described as having “a fairy story with a tragic ending”.

It only won promotion to Brazil’s top division in 2014, but was on its way to the first leg of the Copa Sudamericana final in Medellin when the plane went down.