Shares
Parts of the US state of Hawaii have received a winter weather warning, with up to three feet (90cm) of snow over the past few days. 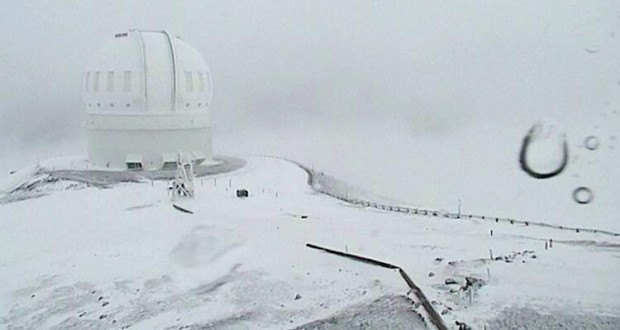 Weather experts say that it is not unusual for snow to fall in tropical Hawaii, but rarely has it fallen so heavily at such low altitudes, the BBC reports.

The snow is heaviest around two of the island’s highest peaks, Mauna Kea and Mauna Loa.

Other parts of Hawaii were hit by flash floods, US media reported.

Meteorologist Matt Foster told the Los Angeles Times that while Mauna Kea and Mauna Loa – both of which are higher than than 14,000ft (4,265m) – are sometimes hit by snowfall five or six times a year, two to three feet of snow across the rest of the island in “a few short days is at the higher end of what we’d typically get”.

He added there are occasionally winters when both mountains receive little or no snow, including 2015.

The winter storm snowfall is expected to keep the access road to the two peaks closed until Monday, when ski and snowboard enthusiasts are expected to take to the slopes.

Much of the rest of Hawaii is being hit by heavy rainfall, with temperatures of around 20C (68F) – far warmer than on the higher ground.

The US National Weather Service says that the unsettled weather pattern will continue over the next few days because of low pressure and “deep tropical moisture”.

It says that while localised heavy rainfall can be expected at times, there will also be breaks in the weather with some sunshine possible.