China capital and 23 other cities declared red alert over smog 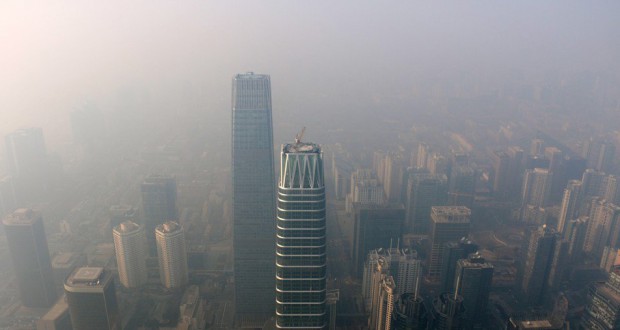 Beijing authorities have declared a five-day pollution “red alert”, shutting schools, ordering thousands of vehicles off the roads and telling residents to stay indoors, after the Chinese capital was enveloped by a shroud of toxic smog that is expected to linger until Wednesday, The Guardian reports. The warning – the first since Beijing’s inaugural red alert in December last year – was officially implemented at 4.20pm on Friday as a nicotine-tinged haze rolled into the city.

“Smog invades Beijing,” tweeted Xinhua, China’s official news agency, alongside a timelapse video capturing the arrival of what city officials have controversially decided to classify as a “meteorological disaster”.

China’s ministry of environmental protection reported that 23 other cities across north and central China had also declared pollution red alerts, including Tianjin, Shijiazhuang, Taiyuan and Zhengzhou. A red alert is the highest level of a four-tier warning system introduced as part of China’s high-profile war on pollution.

Xinhua said nurseries and primary schools across Beijing had been told to close until Wednesday when the smog is expected to lift.

Road works were suspended; older and “dirty” high-emissions vehicles were forbidden from taking to the roads; and heavily polluting industries such as steel plants were ordered to halt or slow their operations.

City officials were also reported to have “penalised” 388 people for igniting outdoor barbecues and fires.

But Dong Liansai, a Beijing-based climate and energy campaigner for environmental group Greenpeace, said coal-fired power stations, not barbecues, were to blame for the unusually severe bout of pollution.

“Coal is the No 1 source,” said Dong, warning that the smog contained tiny airborne particulates known as PM2.5 which were linked to numerous “adverse health effects” including lung cancer, asthma and heart disease.

It should be recalled that early December, Paris suffered its worst winter pollution for at least a decade. The smog was caused by emissions from vehicles, domestic wood fires and near windless weather conditions.