Shares
These mysterious creatures, known as chimaeras, are relatives of sharks and rays, and they have never been filmed alive in its natural environment before. 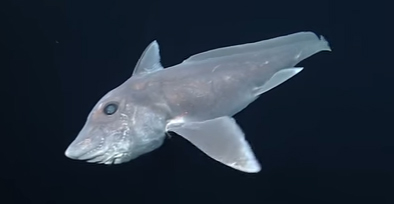 A pointy-nosed blue chimaera, which sports a retractable penis on its head, was also spotted in the Northern Hemisphere for the first time, Joinfo.com reports with reference to the National Geographic magazine.

In 2009, the Monterey Bay Aquarium Research Institute in California sent a remotely operated vehicle, or ROV, on several dives to depths of up to 6,700 feet in waters off California and Hawaii. They weren’t looking for ghost sharks: “The guys doing the video were actually geologists,” says Dave Ebert, program director for the Pacific Shark Research Center at Moss Landing Marine Laboratories.

“Normally, people probably wouldn’t have been looking around in this area, so it’s a little bit of dumb luck,” Ebert says.

To find out its identity, the institute reached out to Ebert and other chimaera experts. The team analyzed the video and now believe it’s a pointy-nosed blue chimaera (Hydrolagus trolli), a species usually found near Australia and New Zealand.