Shares
Japanese toilets at the Narita airport in Tokyo now are equipped with toilet paper for smartphones. Travelers can tear off a sheet to wipe their phone and get information about the Wi-Fi network. 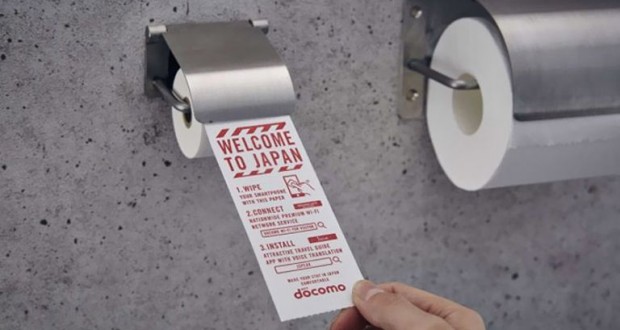 Recent studies show that smartphone screens contain more germs than toilet seats. So, NTT Docomo, a Japanese telecom company behind the initiative, introduced the extra rolls that now are hanging next to the “normal” toilet paper in all toilets at the Narita airport, Joinfo.com reports with reference to the Japanese media.

Users are kindly greeted with the words “Welcome to Japan” on the paper, followed by information about Wi-Fi hotspots and a travel app. The paper can then be used to wipe the screen of a smartphone.

The smartphone cleaning rolls will be available till Mar 15, 2017.

Docomo  also released a video explaining how to use Japan’s toilets and the special rolls of paper for smartphone screens.

Narita is the second largest airport in Japan. About half of all international flights go through this airport. Only the Haneda airport in Tokyo has larger capacity.

Japan has a reputation in respect of hygiene and innovative toilets. Many foreign visitors are amazed at the ultramodern ones with dozens of buttons and lights. They are equipped with heated toilet seats, sound effects and scented sprays to immediately cover up odors. For men, there are intelligent toilet seats, which go up automatically when it detects that the visitor is going to use it standing up.