Shares
An Afriqiyah Airways A320 with 118 people on board has just landed in Malta after it was hijacked by a man claiming to have a hand grenade. 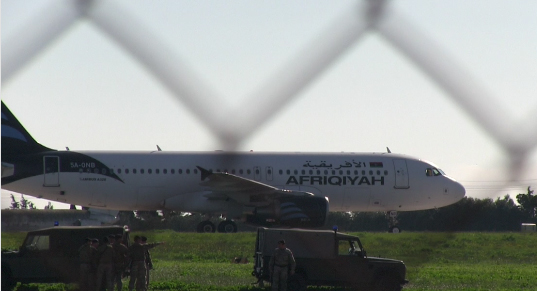 The plane was on an internal flight to the Libian capital of Tripoli and diverted by a hijacker who claimed to have a hand grenade. All flights at the airport were cancelled or diverted until further notice, according to the Times of Malta.

Prime Minister Joseph Muscat tweeted he is informed of a potential hijack situation of an internal Libyan flight diverted to Malta. Security and emergency operations were standing by.

According to the edition, one hijacker is on board. He is claiming to have a hand grenade.

The hijacker claiming to be pro-Gaddafi, said he was willing to let all passengers go apart from the crew, if his demands were met.

It is not known what his demands are at this stage.

The last major hijack incident in Malta took place in November 23, 1985 when an EgyptAir Boeing 737 plane was diverted to the island. Then, 62 people were killed when Egyptian commandos stormed the plane. Only one of the three hijackers survived and was brought to justice.

Image: the Times of Malta.