Shares
China’s first aircraft carrier has set off for the Western Pacific for an open-sea training exercise, the Defense Ministry said. 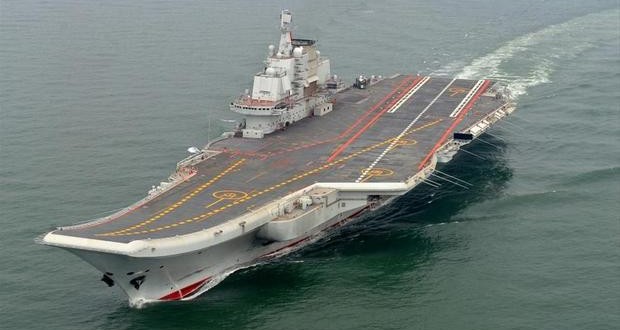 State media said it is the first time that the Liaoning has headed to “distant sea waters.” The statement said a navy formation including the Liaoning set off Saturday for training “in distant sea waters,” without giving details, as part of an annual training plan, Joinfo.com reports with reference to the South China Morning Post.

The Western Pacific region stretches from China to New Zealand and encompasses countries in the Pacific, Oceania and parts of Asia.

The Japanese Defense Ministry said it spotted the Liaoning as part of a fleet of eight Chinese warships that included destroyers and frigates, in the central part of the East China Sea for the first time. It said there was no incursion into Japanese waters.

According to CNN, Taiwan sounded a note of alarm, with its defense minister emphasizing the need for vigilance.

“The threat of our enemy is growing day by day. We should always be maintaining our combat alertness,” said Taiwan Defense Minister Feng Shih-Kuan.

On Tuesday, the carrier sailed through the disputed South China Sea and arrived at a naval base in the southern Chinese province of Hainan, according to the report.

The Liaoning, built from an incomplete hull bought from Ukraine in 1998, first sailed to the South China Sea in 2013.

Beijing has said the carrier would be used mostly for training and research as it prepares to deploy its first home-grown carrier, but it is widely viewed by analysts as a strategic piece in China’s increasingly assertive claims in the South China Sea.