Shares
A rare comet, dubbed Comet 45P/Honda-Mrkos-Pajdusakova, is set to appear somewhere near the crescent moon on the New Year’s eve, according to NASA 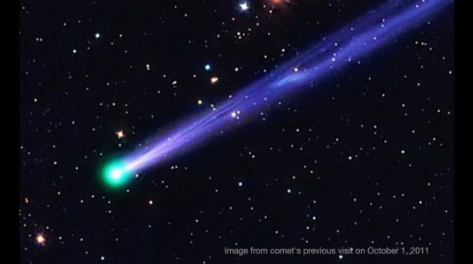 The comet is set to appear as people will be welcoming 2017 on Saturday, December 31. Dr. David Reitzel, of California-based Griffith Observatory, said the comet will be visible to users of strong binoculars or telescope. Interested people should point their instruments to the west just after sunset on Saturday to see the comet, Norcal News reports.

In an Instagram post, the JPL wrote, “Say farewell to 2016 in cosmic style by looking up to see the #NewYearsEve #comet on December 31.”

Comet 45P/Honda-Mrkos-Pajdusakova, which will appear near the moon on New Year’s Eve, is a periodic comet. It returns to the inner part of our solar system roughly every five years.

While many people consider comets as bad omens, Comet 45P/Honda-Mrkos-Pajdusakova will not pose any threat to us. Made of ice and dust, the comet will still be millions of miles away from Earth when it will make its closest flyby this month.