Shares
The 565meter-high Beipanjiang bridge, which took three years to build and cost $140 million, stretches for almost a mile over the Nizhu River Gorge in southwestern China 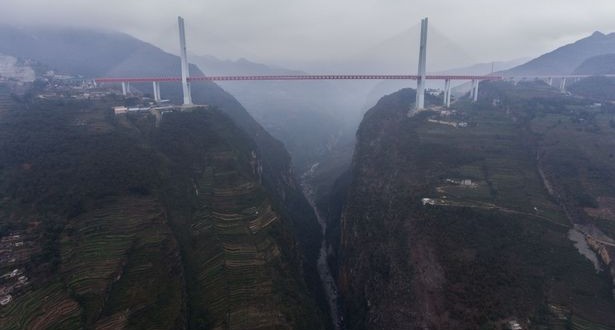 The $140 million bridge opened to traffic on Thursday, connecting Xuanwei city in Yunnan province and Shuicheng in Guizhou, southwestern China. Hanging 565 meters above a gorge, Beipanjiang bridge has been built to save motorists more than four hours in journey time, according to Mirror.

The 1.3kilometer-long four-lane bridge opened to great fanfare after it took more than three years to build.

Engineers constructing the cable-stayed bridge were filmed teetering on the edge of the huge steel structure during the works.

Even as fog covered the gigantic structure, which stretches across the Nizhu River Gorge, they continued to work on the bridge so it could open before the end of 2016.

According to the engineers, the deviation in construction must be within five millimeters.

China is also home to the second and third highest bridges – the Sidu River Bridge and the Puli Bridge, respectively.