Dinosaurs took 3 to 6 months to hatch

Shares
A new study finds that dinosaur eggs took a long time of 3 to 6 months to hatch, which could contribute to their extinction 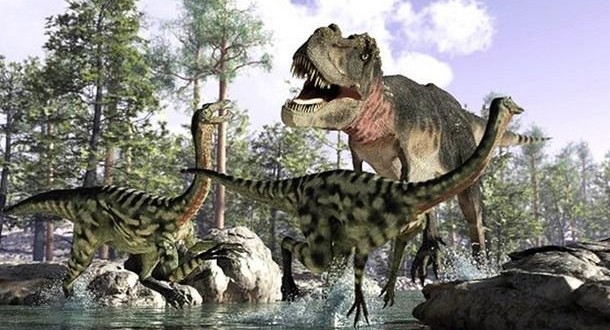 A team of researchers from the Florida State University has studied teeth structure of the fossilized embryos of two dinosaur species and found that their babies took from 3 to 6 months to hatch from the eggs, the Science Mag reports.

The study dates back to the mid-1990s, when Gregory Erickson, then a master’s student, began closely examining a Tyrannosaurus rex tooth. Erickson, now a paleontologist at Florida State University in Tallahassee, noticed more than 900 fine lines resembling tree rings on the tooth. Known as Von Ebner’s “incremental growth lines,” they were previously seen only in mammals. The lines provide a record of the tooth’s history: Each line represents the daily deposit of bony tissue called dentine within the tooth’s enamel shell.

“I speculated that they might exist in the embryos of dinosaurs as well,” Erickson says. Dinosaurs go through several generations of teeth—they even chew—while still inside the egg. If those embryonic teeth had daily growth lines—researchers might use them to answer a longstanding puzzle, Erickson hypothesized: how long dinosaurs remained in the egg before they hatched. But finding samples isn’t easy. Although fossilized dinosaur eggs are extremely common, fossilized dinosaur embryos are the rarest of the rare.

So Erickson teamed up with researchers at other institutions to study some rare dino embryos. The American Museum of Natural History (AMNH) in New York City has an impressive collection of dinosaur fossils collected in Mongolia’s Gobi Desert over the past century, including a fossilized clutch of 12 eggs belonging to a large horned dino called Protoceratops andrewsi. Each of those contains a tiny embryo skeleton. From one of the embryos, the researchers extracted a tiny jawline with several teeth. Meanwhile, the team obtained another tooth from an embryo of a duckbilled dino called Hypacrosaurus stebingeri from a colleague at the University of Calgary in Canada.

The team sliced one of the tiny P. andrewsi teeth into sections and examined them in a microscope under polarized light. There were dozens of tiny growth lines, confirming Erickson’s suspicions. “I knew we were in business then,” he says. The team also used computed tomography scanning, which recreates a virtual model of the teeth via x-ray images, to count the lines and determine growth rates from root to crown. Based on these data, incubation times for the dinosaurs ranged from about 3 to 6 months, the team reports today in the Proceedings of the National Academy of Sciences. The finding suggests that, at least in terms of hatch times, dinosaurs were more like modern reptiles than birds.

“We’re getting used to thinking about dinosaurs as overgrown birds,” says Stephen Brusatte, a paleontologist at the University of Edinburgh who was not involved in the work. “This discovery shows that the fast incubation of modern birds … [might] have evolved much later, probably sometime around the origin of flight, or maybe even after flight evolved.”

The long incubation times of dino eggs have some interesting implications, Erickson says. Nesting is one of the most perilous times for egg-laying animals: Predators can steal eggs, floods or drought can destroy them, and the parents may suffer from hunger or exposure to predators as they guard the eggs.

Longer incubation times can be a particular disadvantage in the wake of a cataclysmic event such as the asteroid that struck Earth at the end of the Cretaceous period 66 million years ago. When the asteroid hit, “dinosaurs were basically caught holding bad cards—a dead man’s hand,” Erickson says. They were warm-blooded, large animals who already required a lot of food and expended a lot of energy. Add in long incubation times and a long lag time between successive generations—and any dinosaurs that survived the impact would have a hard time adapting to rapidly changing conditions and competing for resources against other survivors, such as amphibians, modern birds, and mammals.

Now the scientists plan to study Von Ebner’s lines of other species of dinosaur, like Tyrannosaurus rex and Velociraptor – that are the closer cousins and ancestors of birds.

“What would be really interesting now is to see if small theropod dinosaurs like Velociraptor also incubated slowly,” Brusatte says. “If more modern-style birds are the only ones that incubate very quickly, it could be that this feat of biology gave them a better lotto ticket for surviving the asteroid impact that killed off all of the other dinosaurs.”