Shares
The German publisher of a special annotated edition of Adolf Hitler's Mein Kampf says sales have soared since its launch a year ago. 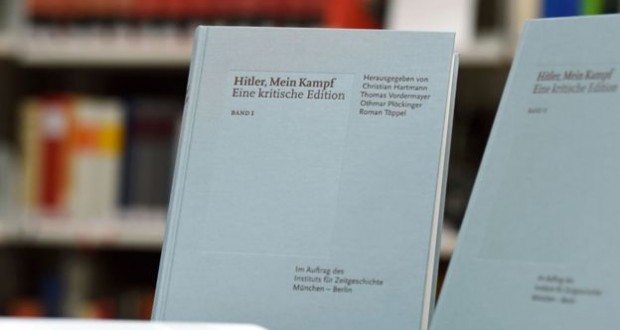 About 85,000 German-language copies of the anti-Semitic Nazi manifesto have been sold. Publisher Andreas Wirsching said “the figures overwhelmed us”, the BBC reports.

He is director of the Institute of Contemporary History (IfZ) in Munich.

At the end of January, the IfZ will launch a sixth print run. The book contains critical notes by scholars.

Unlike the Nazi-era editions, the IfZ’s Mein Kampf (My Struggle) has a plain white cover – without a picture of Hitler. The swastika and other Nazi symbols are banned in Germany.

Mr Wirsching told the German news agency DPA that the IfZ was planning a shorter, French-language edition. “But two-thirds of our commentaries will be translated” for it, he said.

The decision to republish the inflammatory book was criticised by Jewish groups. Mein Kampf was originally printed in 1925 – eight years before Hitler came to power.

It sets out racist ideas that the Nazis put into practice later, including the denigration and oppression of Jews and Slavs.

After Nazi Germany was defeated in 1945, the Allied forces handed the copyright to the state of Bavaria. Under German law copyright lasts for 70 years.

While the Bavarian regional government held the copyright, reprinting of the book was banned. But the copyright expired a year ago.

Mr Wirsching said he favoured “clever” teachers using the IfZ edition in the classroom. He warned against “repeating the absurd 1950s discussion, when people said ‘it was all Hitler’s fault’.”

He said the IfZ had obtained solid legal advice before republishing the book on a limited scale. And the scholarly edition was aimed partly at pre-empting any editions put out by Nazi sympathisers.

“It would be irresponsible to just let this text spread arbitrarily,” he told DPA.