Home / World / Biggest iceberg ever is ready to crack off Antarctica

Biggest iceberg ever is ready to crack off Antarctica

Shares
A massive iceberg, expected to be one of the biggest ever recorded with an area almost the size of the U.S. state of Delaware is poised to break off Antarctica. 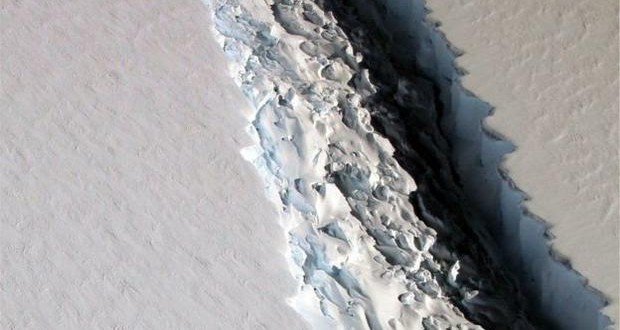 A rift, slowly developing across the Larsen C ice shelf on the Antarctic Peninsula in recent years, expanded abruptly last month, growing by about 18 km (11 miles). It is now more than 80 km long with just 20 km left before it snaps, scientists said, Reuters reports.

“The Larsen C Ice shelf in Antarctica is primed to shed an area of more than 5,000 square km (1,930 square miles) following further substantial rift growth,” scientists at Project Midas at the University of Swansea in Wales said in a statement.

The iceberg “will fundamentally change the landscape of the Antarctic Peninsula” and could herald a wider break-up of the Larsen C ice shelf, the statement said.

Ice shelves are areas of ice floating on the sea, several hundred meters thick, at the end of glaciers.

Scientists fear the loss of ice shelves around the frozen continent will allow glaciers inland to slide faster towards the sea as temperatures rise because of global warming, raising world sea levels. Several ice shelves have cracked up around northern parts of Antarctica in recent years, including the Larsen B that disintegrated in 2002.

Andrew Fleming, remote sensing manager at the British Antarctic Survey who also tracks the Larsen C, said the ice was being thawed both by warmer air above and by warmer waters below.

In some cases, big icebergs simply float around Antarctica for years, causing little threat to shipping lanes as they melt. More rarely, icebergs drift as far north as South America.

“The Larsen B shattered like car safety glass into thousands and thousands of pieces. It disappeared in the space of about a week,” he told Reuters.

Last year was the warmest on record by a wide margin, stoked by greenhouse gases and an El Nino weather event that released heat from the Pacific Ocean, the European Union’s Copernicus Climate Change Service said on Thursday.

In November, almost 200 nations reaffirmed plans to combat climate change as an “urgent duty”, worried that U.S. President-elect Donald Trump will try to undo a hard-won global accord for limiting greenhouse gas emissions.