Shares
The Real Madrid star was also named in the FIFpro team of the year, alongside Lionel Messi and Luis Suarez 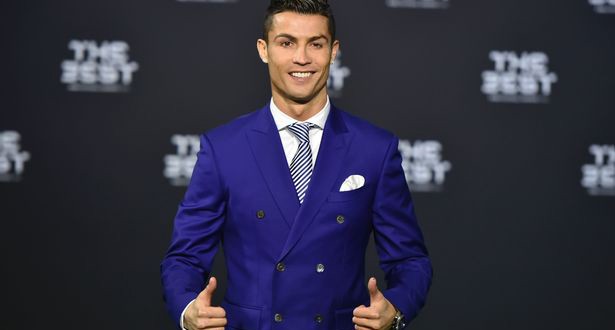 Cristiano Ronaldo has been crowned the first ever world player of the year at the Best FIFA Football Awards, Mirror reports.

The Real Madrid star fought off competition from Barcelona rival Lionel Messi to win the trophy in its inaugural year. He received his award in person in Zurich.

He was also named in the FIFpro team of the year, alongside Barcelona pair Messi and Luis Suarez.

“I’m just very happy. I’m sorry some people from Barcelona aren’t here, but that’s understandable,” he said during yet another acceptance speech.

As he collected his trophy, former Manchester United star Ronaldo hailed 2016 as his best ever year.

“I tell you, 2016 was the best year of my career. I had a lot of doubts but the trophy showed that I lived up to that.

“After I won what I did, I had no doubts.

“It was a year that was magnificent on a personal level, on a sports level. I would like to thank very warmly everybody who voted for me. To the fans, to the other players, to the media: thank you.”

FIFA launched the Best Football Awards after ending its association with the Ballon D’Or.

Football’s governing body designed a brand new player of the year trophy and explained how the awards were decided before the ceremony itself.

“The remaining 50 per cent is split equally between an online public ballot of football fans (25 per cent) and submissions from a selected group of media representatives (25 per cent) from all around the world. The vote took place between Friday 4 November and Tuesday 22 November 2016.”