Shares
A 6.1 magnitude earthquake has hit off the coast of Fiji on Saturday evening, the second strong shake to rattle the earth near the island nation this year. 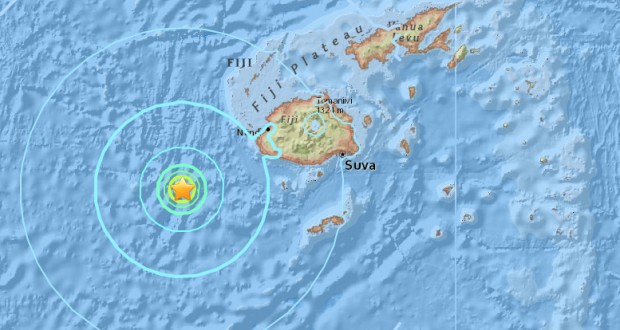 The quake’s epicenter was 152km southwest of the city of Nadi, according to the US Geological Survey. It struck about 6pm at a depth of 10km, New Zealand Herald reports.

Last week a quake with a magnitude of 7.2 struck 284km off the coast of Fiji at 10.52am, triggering a tsunami warning.

The National Weather service Pacific Tsunami Warning Centre issued a tsunami warning after the quake saying: “Based on the preliminary earthquake parameters, hazardous tsunami waves are possible for coasts located within 300km of the earthquake epicenter.”

But later the center announced that saying the tsunami warning had been canceled.

It should be recalled that 5.5-magnitude earthquake hit Madagascar three days ago.