Shares
Mideast conflict: A conference for peace in the Middle East on Sunday warned Israel and the Palestinians against taking "unilateral steps" on Jerusalem and on borders that could imperil a negotiated solution to their seven-decade conflict. 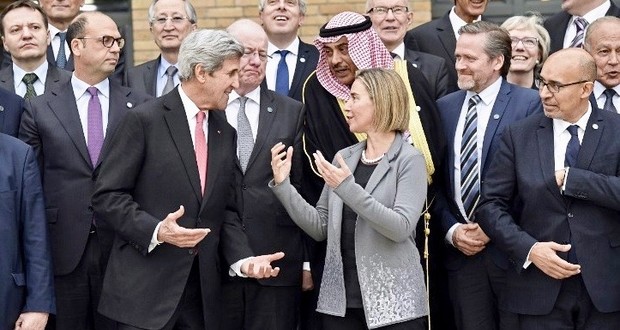 More than 70 countries have called on Israel and the Palestinians to restate their commitment to a peace settlement and to refrain from unilateral actions, RFE/RL reports.

The call was made in the final communique at a Mideast peace conference in Paris on January 15.

The statement urged both sides to “officially restate their commitment to the two-state solution” and disassociate from voices that reject this.

Palestinians welcomed the gathering and the final statement. But Israeli Prime Minister Benjamin Netanyahu — who refused to attend — said the conference was “rigged” against Israel.

Palestinians welcomed the gathering, but Israeli Prime Minister Benjamin Netanyahu — who refused to attend — said the conference is “rigged” against Israel.

The last round of direct peace talks collapsed amid acrimony in April 2014 after nine months of negotiations.

Palestinian official Saeb Erekat said the statement amounted to a rejection of Israel’s occupation and settlement construction in captured territories. He said it sends a message that Israel “cannot achieve peace and stability” without ending its occupation.

Speaking to reporters after attending the gathering, U.S. Secretary of State John Kerry said it was significant that the final statement recognizes both the need to end Palestinian incitement and violence, as well as Israel’s security needs.

No representatives of the incoming administration of U.S. President-elect Donald Trump took part.

French President Francois Hollande said that “only direct negotiations between Israelis and Palestinians can lead to peace. No one will do it in their place.”

“The world cannot, should not, resign itself to the status quo,” he told diplomats in Paris, who came from across Europe, the Mideast, and other regions.

French Foreign Minister Jean-Marc Ayrault said that the international community is committed to encouraging a return to the negotiating table to broker a solution that sees both an Israeli and Palestinian state.

He said that the basis for negotiation is a return to the borders of 1967 and the recognition of the major resolutions passed at the United Nations.

The status of Jerusalem is one of the most sensitive and complex issues of the conflict.

Trump promised during the election campaign to recognize Jerusalem as Israel’s capital and move the U.S. Embassy from Tel Aviv to Jerusalem.

Ayrault said moving the U.S. Embassy in Israel to Jerusalem from its current place in Tel Aviv would be a “provocation.”

He said that his country fears that an embassy move will unleash new Mideast violence.

Ahead of the Paris gathering, Palestinian Authority President Mahmud Abbas warned that moving the U.S. Embassy to Jerusalem would “not help the peace process.”

Palestinians regard East Jerusalem as the capital of their future state, while Israel proclaims the entire city as its capital. Britain said on Sunday it had reservations about the outcome of the conference in Paris, saying it risked “hardening positions.”

“We have particular reservations about an international conference intended to advance peace between the parties that does not involve them—indeed which is taking place against the wishes of the Israelis—and which is taking place just days before the transition to a new American President when the US will be the ultimate guarantor of any agreement,” a Foreign Office statement said.

“There are risks therefore that this conference hardens positions at a time when we need to be encouraging the conditions for peace.”

Britain had observer status at the conference. It did not back the final communiqué.

London last month scolded Kerry for describing the Israeli government as the most right-wing in Israeli history, a move that aligned Prime Minister Theresa May more closely with President-elect Donald Trump.

Sources in Jerusalem responded to the statement with relief. A fear of a further Security Council resolution condemning Israel this week seemed to have been alleviated. Further, problematic sections from the draft summary were removed, including comparisons of violence to settlements.

The Palestinians have welcomed the closing statement. Palestinian Authority President Mahmoud Abbas, who said on Saturday that moving the US embassy to Jerusalem would kill off the peace process, said the Paris meeting would help at stopping “settlement activities and destroying the two-state solution through dictations and the use of force.”

Palestinian official Saeb Erekat said it amounted to a rejection of Israel’s occupation and settlement construction in captured territories. He said it sends a message that Israel “cannot achieve peace and stability” without ending its occupation.