Shares
8 people have as much as the 3.6 billion poorest people in the world and the ratio between the richest and the poorest in the world is becoming more extreme, according to the Oxfam report 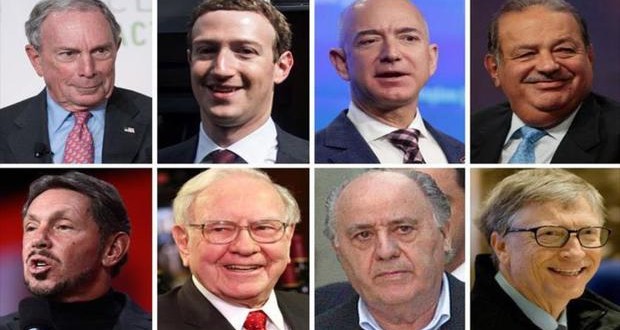 The gap between the richest and the poorest half of the global population is more than previously thought. Just eight men own as much wealth as 3.6 billion people, according to a report by Oxfam published on Monday.

According to the report, Bill Gates, Microsoft founder, is the richest man in the world with a net worth of $75 billion. The rest of the list includes Amancio Ortega, the Spanish founder of fashion house Inditex, financier Warren Buffett, Mexican business magnate Carlos Slim Helu, Amazon’s Jeff Bezos, Facebook CEO Mark Zuckerberg, Oracle’s Larry Ellison and Bloomberg, the former mayor of New York.

The report was published before the coming annual summit of the global political and business elites in the Swiss ski resort of Davos.

So, anti-poverty organization Oxfam says the gap between the very rich and poor is far greater than just a year ago. Thus, Oxfam calls on governments to tackle inequality.

“It is obscene for so much wealth to be held in the hands of so few when 1 in 10 people survive on less than $2 a day,” said Winnie Byanyima, executive director of Oxfam International, who will be attending the meeting in Davos. “Inequality is trapping hundreds of millions in poverty; it is fracturing our societies and undermining democracy.”

If not, it warns, public anger against this kind of inequality will continue to grow and lead to more seismic political changes akin to last year’s election of Donald Trump as U.S. president and Britain’s vote to leave the European Union, according to the Toronto Sun.

The same report a year earlier said that the richest 62 people on the planet owned as much wealth as the bottom half of the population. However, Oxfam has revised that figure down to eight following new information gathered by Swiss bank Credit Suisse.

They include higher taxes on wealth and income to ensure a more level playing field and to fund investments in public services and jobs, greater co-operation among governments on ensuring workers are paid decently and the rich don’t dodge their taxes. And business leaders should commit to paying their fair share of taxes and a living wage to employees.

Max Lawson, Oxfam’s policy adviser, urged billionaires to “do the right thing,” and to do “what Bill Gates has called on them to do, which is pay their taxes.”

The ability of the rich to avoid paying their fair share of taxes was vividly exposed last year in the so-called “Panama Papers,” a leaked trove of data that revealed details on offshore accounts that helped individuals shelter their wealth.

“We have a situation where billionaires are paying less tax often than their cleaner or their secretary,” Lawson told The Associated Press. “That’s crazy.”