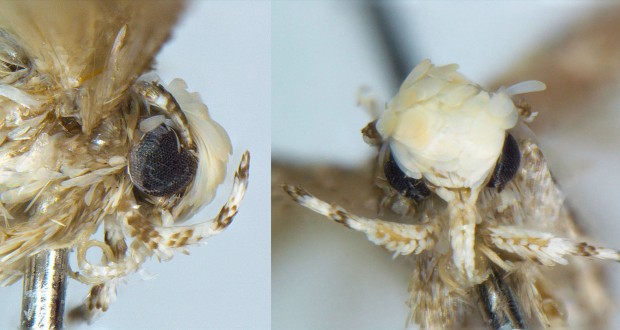 A miniscule moth has a wingspan of just 0.4 inches (9 millimeters). Its yellow and white scales topping on the head resemble a signature hairstyle of Donald Trump, inspiring the name Neopalpa donaldtrumpi, wrote evolutionary biologist Vazrick Nazari, a researcher from Ottawa, Canada, in a new study, Joinfo.com reports with reference to Live Science.

The moth’s habitat extends from Southern California in the U.S. through Baja California in Mexico. The wall that the president-elect has proposed building along the border between the two countries could divide that stretch.

Nazari discovered the new species while examining moth specimens from the Bohart Museum of Entomology in California during an investigation of the North American moth family Gelechiidae, also known as twirler moths.

“Its distinctive wing pattern and its unique DNA bar code immediately flagged it as a new and undescribed species,” Nazari told Live Science in an email.

The shapes of certain folds and pouch-like structures on N. donaldtrumpi’s genitalia were also unique to the species, Nazari wrote in the study.

Twirler moths earned their common name from a habit of twirling in circles when disturbed. This is the second twirler moth species to be described in the Neopalpa genus, though the family includes more than 4,830 described species, and there may be as many as 10,000 species in that family worldwide, according to the “Encyclopedia of Entomology” (Springer Netherlands, 2008).

The moth’s head scales are yellowish-white and “often rough,” with additional orange-yellow coloration that Nazari described as “distinctive.” Their miniscule bodies are off-white, and their wings are brown or grayish-brown, Nazari wrote in the study.

Lending a recognizable name to a new species can help inspire public interest — not only for the newly discovered animal, but also for the ecosystem it inhabits and the threats it might face, Nazari said. Scientists have named new species after “Star Wars” characters, musical icons like Johnny Cash and Beyoncé, and actor Johnny Depp, to name just a few.

President Barack Obama has inspired more species names than any other president — nine in total, including a coral reef fish native to Hawaii, a trapdoor spider and a type of lichen.

Though small, the yellow-headed moth N. donaldtrumpi could have a big impact on biodiversity awareness — for the general public and perhaps for the president-elect himself, Nazari said.

“I hope that the president will make conservation of such fragile ecosystems in the U.S. his top priority,” he told Live Science. “These ecosystems still contain many undiscovered and undescribed species, and deserve to be protected for future generations.”