Shares
A car drove into pedestrians along the mall in Melbourne center on Friday. Police said the driver was arrested and the situation was contained. Police see no connection to terrorism 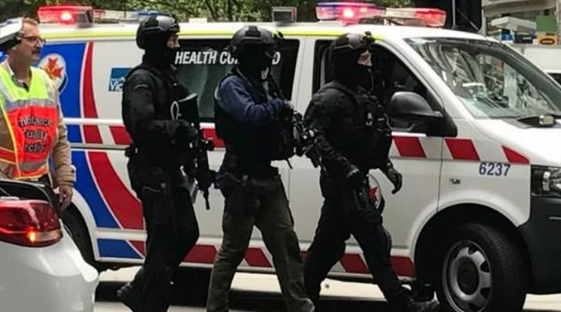 Three people, including a young child, have been killed and at least 20 others injured after a man allegedly drove into pedestrians in Melbourne’s central business district, 9 News reports.

Police said the incident is related to a stabbing in Windsor in inner Melbourne earlier on Friday and is not terror-related.

It’s believed the driver was doing burn-outs nearby before they turned into a busy pedestrian mall.

The car was then allegedly driven deliberately into pedestrians as it sped along the mall, with people leaping out of the way and running for their lives.

Police shot the driver, who was the only person in the car at the time.

He was arrested near the corner of Bourke and William Streets, seen cuffed on the ground, shirtless and wearing a pair of red underwear.

He is being treated for non-life threatening injuries.

Acting Commander Stuart Bateson from Victoria Police said the incident was not “terror-related”.

“We do believe it is connected to an earlier stabbing in the southern metro region,” Commander Bateson said.

He confirmed the man alleged to be responsible had been arrested and the situation was contained.

Detectives believe the incident is linked to an earlier stabbing.

Police were called earlier Friday to reports of an argument between two brothers.

One of the men was left fighting for his life after allegedly being stabbed by his sibling. Following the stabbing, it is alleged the same man took a woman, who is known to him, hostage in his car. She managed to escape from the car.

“He [the driver] was driving a red car and shouting. Someone was screaming because he was getting crazy,” witness Stefano Pavan said. “He was waving at police from inside the car.” Witnesses reported hearing at least five gunshots before the man was arrested.