Shares
The estimated 200,000 people planning to crowd the streets of the nation’s capital a day after Donald Trump’s inauguration as the 45th president aren't organized by a single group. Sister marches are planned for all 50 states and in 32 countries around the world. 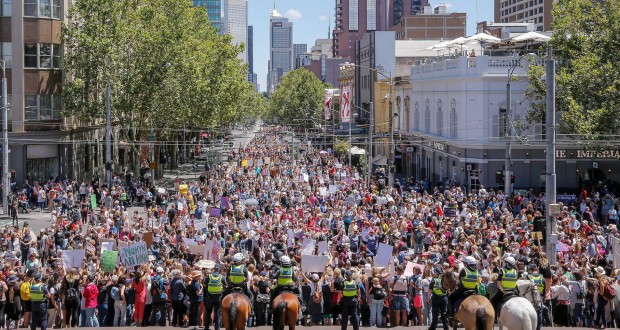 The estimated 200,000 people planning to crowd the streets of the nation’s capital a day after Donald Trump’s inauguration as the 45th president aren’t organized by a single group. Sister marches are planned for all 50 states and in 32 countries around the world.

You can watch all the events streamed on the USA Today site.

As The Guardian reports, hundreds of people joined protests in Tokyo, including many American expatriates. “Trump presidency gets my blood boiling … Everything we value could be gone. It’s time to speak your mind and concerns and to do our best to salvage the values we cherish in America,” said Bill Scholer, an art teacher.

In Manila on Friday, about 200 demonstrators from a Philippine nationalist group rallied for about an hour against Trump outside the US embassy. Some held up signs demanding US troops leave the Philippines, and others set fire to a paper US flag bearing a picture of Trump’s face.

Protesters in Australia and New Zealand were the first to start marching today. In Sydney, Australia’s biggest city, about 3,000 people gathered for a rally in Hyde Park before marching on the US consulate downtown. A further 5,000 people rallied in Melbourne. In New Zealand there were marches in four cities, involving around 2,000 people.

“Feminism is my Trump card” and “Fight like a girl,” were among the placards seen in Sydney. Organiser Mindy Freiband told Reuters: “We’re not marching as an anti-Trump movement per se, we’re marching to protest the hate speech, the hateful rhetoric, the misogyny, the bigotry, the xenophobia and we want to present a united voice with women around the globe.”

Many of the protesters in Sydney and Melbourne wore pink hats, which activists referred to as their “pussyhats”. Many said they were worried that Trump’s politics and his attitude towards women and minorities could spread. “As a mature 56-year-old lesbian, I feel for the first time what is global is local,” said Vicki Skehan. “We’ve come so far with inclusiveness and I don’t want to see that go away.”

Pictures are flooding in of preparations and marches. Here are a few from Thailand and Australia. A woman holding her child and a protest sign in Bangkok, Thailand. Photograph: Diego Azubel/EPA Women’s March LA is already taking over Pershing Square. Here are some of the brilliant designs. #womensmarchlosangeles #womensmarch pic.twitter.com/Rm8M141cFV

Hard to argue with the sentiment here. #WomensMarch #sydney pic.twitter.com/zF09w3uw7g

Kentucky & West Virginia @MomsDemand on their way to DC. America is gonna be alright folks. The women have got this. #WomensMarch #WhyIMarch pic.twitter.com/SOekI0Wakz

Women (and men) gather in front of the majestic #Pantheon in #Rome ahead of the #WomensMarch #wearenotfakenews pic.twitter.com/VTBJ1lWAAF

I love this sign @SarahLerner made for the #WomensMarch. pic.twitter.com/Wi4PixbX8z