Shares
Chile declared a state of emergency Friday as more than a dozen wildfires that have scorched nearly 50,000 hectares (123,500 acres) threatened to encroach on towns, factories and vineyards. 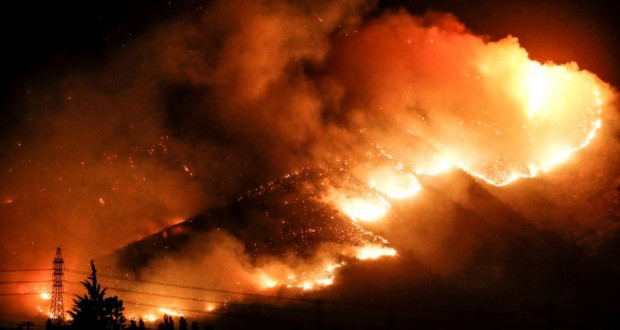 Firefighters, forestry service personnel and members of the military were battling 18 separate blazes in the center and south of the country that have been fueled by strong winds and a heat wave, according to VoA.

The largest has consumed 24,000 hectares in and around Pumanque, a rural area 140 kilometers (87 miles) south of the capital, Santiago, that is near some of Chile’s vineyards. “I’ve instructed the Interior Ministry to declare a catastrophe zone and a state of emergency in the areas affected by the fires,” President Michelle Bachelet said on Twitter.

The smoke from the blazes cloaked Santiago in a thick haze. Television news images showed helicopters and planes trying to douse the out-of-control fires, apparently to little avail.

The head of Chile’s CONAF forestry service, Aaron Cavieres, said the fires were caused by humans, but that it could not be determined whether they were set intentionally.

According to the BBC, President Michelle Bachelet said she had asked for help from countries with experience of forest fires.

“The firefighters are doing all that is humanly possible,” she said.

But Chile has “practically exhausted its capacity to fight the blazes”, Ms Bachelet added.

She asked for help from her French counterpart, Francois Hollande, who is visiting Chile.

There were more than 100 uncontrolled fires in central and southern Chile until a few days ago.