Shares
The manager of the Italian Rigopiano hotel hit by an avalanche told officials shortly before the disaster that his guests were terrified by repeated earthquakes, and trapped there by snowdrifts. 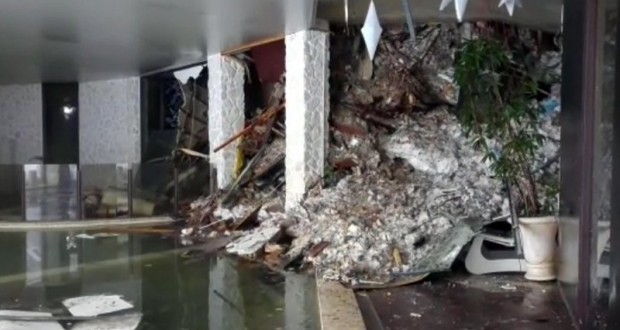 Bruno Di Tommaso’s warning came in an email published by Italian media, as rescuers continued searching for 23 missing people at the Rigopiano hotel, the BBC reports.

After the series of earthquakes, avalanche buried the remote hotel in Abruzzo, central Italy on Wednesday, killing at least six people.

Nine survivors have been pulled from the snow.

The avalanche – weighing some 120,000 tonnes – hit the luxury hotel with a speed of about 100km/h (60mph). There are still hopes that there may be more survivors holed up in air pockets in the snow.

Di Tommaso sent an email on Wednesday, before the avalanche, to warn the governors of Pescara province, the local police chief and the Farindola mayor that the situation was “worrying”.

He asked them to prepare to intervene, saying the guests were “terrified by the earthquakes” and had decided to stay outdoors.

“We’ve tried to calm them down, but they are unable to leave because the roads are blocked, and they are preparing to spend the night in their cars.”

He reported that the hotel’s diesel supply for the electricity generator would run out the next day, and the bad weather had cut off the phone network.

“There is about two metres (7ft) of snow around the hotel and 12 of our rooms are occupied currently, not counting staff,” the email said.

Italian media say the Pescara authorities already knew at 07:00 (06:00 GMT) on Wednesday that a special, high-powered snowplough would be needed to unblock the road to the hotel. The avalanche, triggered by the earthquakes, struck at about 17:00.

“Nobody underestimated the email,” he said, explaining that he had assured the hotel owner’s sister that a special snowplough – a “turbina” – would be on its way to unblock the road by that evening.

“For me it is an irrelevant email – we never stopped,” he said.

One of the avalanche survivors said she ate ice and snow to quench her thirst during a 58-hour ordeal.

Many of the guests had gathered on the ground floor to await evacuation following the earthquakes.

Italy has seen a wave of damaging quakes in recent months. The Apennines region saw three magnitude six tremors between August and October.

Italy’s complex tectonics mean that the Apennines are subject to extension, or “pull-apart”, which works at a rate of 3mm per year. The geological stress is spread across a number of fault lines in the mountain ranges.