Shares
Emergency workers on Monday rescued three puppies from a destroyed Italian hotel that was buried under tons of snow by an avalanche, bringing joy to searchers who've had little reason to hold on to hope. 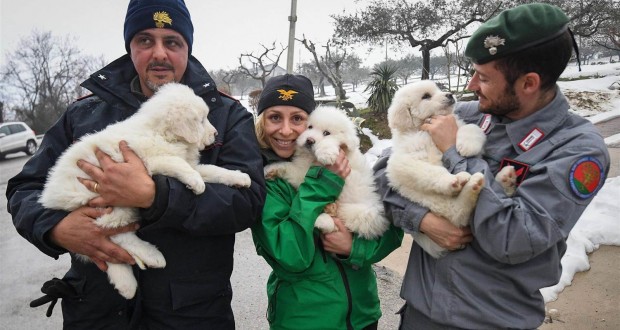 The puppies were found in an air pocket in the hotel’s boiler room, the brigade said.

Rescue workers were holding out hope for survivors as more than 20 guests and workers remained missing after the avalanche. Authorities raised the death toll to seven on Monday, according to the Associated Press.

Nine others have been rescued from the rubble.

The three rescued puppies are the offspring of Nuvola and Lupo, two sheepdogs who also lived at the hotel, officials said. The litter was born on Dec. 4. Lupo and Nuvola managed to escape the avalanche alive, the brigade said, and were found in Farindola on Friday by a bartender at the hotel who knew the dogs well and was not working on the day of the incident.

The National Animal Protection Agency (ENPA) in Italy told NBC News that Nuvola and Lupo were currently with a friend of the missing hotel’s owner, and they were working on getting them reunited with their puppies.

The hotel’s owner is still missing.