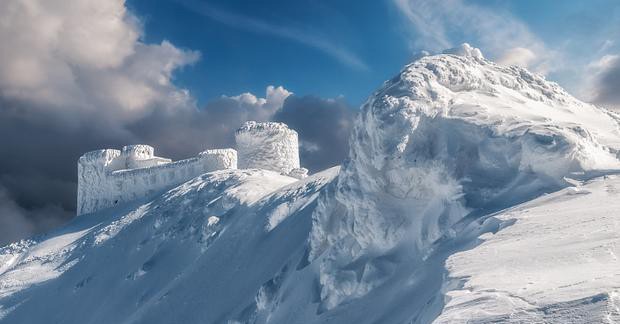 The stunning white and blue photo made by a Ukrainian photographer Taras Dut shows an ice castle on top of the Pip Ivan mountain in the Carpathians. This photograph has been selected to the finale of the international Wiki Loves Earth photo competition, Joinfo.com reports.

Ukrainian photographer made this fabulous photo of the snow-covered observatory on top of the Pip Ivan mountain together with his friend. The mountain is 2,028 meters high above sea level. The weather conditions are harsh there in winter: deep snow and frost of  -20C. The friends spent a night on the mountain in order to take a picture at dawn. The Pip Ivan mountain is very beautiful but very dangerous as well. A group of tourists got stuck on the mountain in December because of the difficult weather conditions. A rescue team had to help the tourists descent from the mountain.

According to the contest site, 15 finalists of the third-year Wiki Loves Earth contest were selected among more than 13,600 participants. The top 15 photos of the gorgeous landscapes this year come from Serbia, Bulgaria, Nepal, Estonia, Ukraine, Spain, Austria, Brazil, Germany, and Thailand.

The Carpathian Mountains is a mountain range system forming an arc roughly 1,500 km (932 mi) long across Central and Eastern Europe, making them the second-longest mountain range in Europe (after the Scandinavian Mountains, 1,700 km (1,056 mi)).

They are very picturesque and photogenic, as you can see in this breathtaking video below: